Fight House: Rivalries in the White House from Truman to Trump (Hardcover) 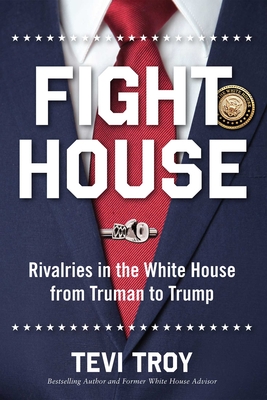 Fight House: Rivalries in the White House from Truman to Trump (Hardcover)

THE WHITE HOUSE HAS ALWAYS BEEN A FIGHT HOUSE

But as presidential historian and former White House staffer Tevi Troy reminds us, bitter rivalries inside the White House are nothing new.

From the presidencies of Harry S. Truman, when the modern White House staff took shape, to Donald Trump, the White House has been filled with ambitious people playing for the highest stakes and bearing bitter grudges.

-How the supposed “Camelot” Kennedy White House was rife with conflict

Insightful, entertaining, and important, Tevi Troy’s Fight House will delight and instruct anyone interested in American politics and presidential history.
TEVI TROY, Ph.D., is a bestselling author, presidential historian, and a frequent television and radio analyst, appearing on CNN, Fox News, Fox Business, CNBC, C-SPAN, and PBS NewsHour, among other outlets. Dr. Troy also has extensive White House experience, having served in several high-level positions over a five-year period, culminating in his service as Deputy Assistant and then Acting Assistant to the President for Domestic Policy. He is the author of Shall We Wake the President?, a history of presidents dealing with disasters, which made three best-of-the-year lists in 2016. His 2013 book, What Jefferson Read, Ike Watched, and Obama Tweeted: 200 Years of Popular Culture in the White House, was a Washington Post bestseller. Dr. Troy has a B.S. in Industrial and Labor Relations from Cornell University and an M.A and Ph.D. in American Civilization from the University of Texas at Austin. He lives in Maryland with his wife, Kami, and their four children.
“The White House is a dignified seat of government, but it is also bullpen, cockfight, and viper nest. During the Johnson and Nixon presidencies, these rivalries, encouraged by both chief executives, yielded policies contrary to presidential and national intention. Fight House at once illuminates these conflicts and reminds us of their absurd, and sometimes tragic, results. Fight House is a fast read, full of both gossip and deep insight.”
— —Amity Shlaes, author of Great Society: A New History

“Tevi Troy presents such a vivid and accurate portrait of the strife, sniping, backbiting, leaking, and intrigue in the Reagan White House that I found it perfectly excruciating to read. I mean that as a compliment. Deeply researched, briskly written, and full of judicious, useful lessons, Fight House is just a marvelous book.”
— —Peter Robinson, the Murdoch Distinguished Policy Fellow at the Hoover Institution and a former speechwriter and special assistant to President Reagan

“Everything about working in the White House is magnified—and nowhere is that more true than in the intensity of staff infighting. Tevi Troy tells the tale of the personalities who played hardball and the warring factions that shaped the modern presidency. It’s a fun and fascinating book—essential to anyone who aspires to serve in the highest office in the land.”
— —Anthony Scaramucci, founder of Skybridge Capital and former White House Director of Communications

“Fight House is an outstanding contribution to presidential history that reminds us that bitter conflicts within administrations are the norm, not the exception. Because he is that rare combination of historian and former White House aide, Tevi Troy is able to make the behind-the-scenes battles between cabinet officials and presidential aides come alive with deep political insights mixed with subtle wit. This book is a must-read for political junkies, historians, and all future White House transition teams.”
— —Vincent J. Cannato, associate professor of history at the University of Massachusetts Boston and author of The Ungovernable City: John Lindsay and His Struggle to Save New York

“Tevi Troy has done a superb job of chronicling infighting in the modern White House. I saw it firsthand from the Nixon White House and can vouch for the phenomenon. People already in positions of immense power almost inevitably seek even more. Troy’s analysis is must-reading for any fan of ‘inside politics’ or presidential history.”
— —Geoff Shepard, former senior member of President Nixon's Domestic Council staff and author of The Real Watergate Scandal