***The Daytime Book Group will be meeting up the block from the bookstore in P&P's primary classroom for its discussion on December 21, at 12:30 p.m. Here is the address of the classroom: 5039 Connecticut Ave, Unit # 7 – which is the very first door north of Comet Ping Pong in the brick offices on the corner of Connecticut and Nebraska. It is a dark red door that I will post a sign on, so you can be confident you’re entering the right space.*** 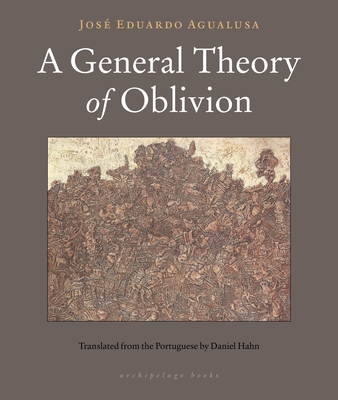 A General Theory of Oblivion (Paperback)

"Who is this solitary young woman on the top floor of a luxury building in Luanda, Angola’s capital, and why has she walled off her apartment? Her name is Ludo…Her brooding presence is inescapable”  — Kirkus Reviews

On the eve of Angolan independence, an agoraphobic woman named Ludo bricks herself into her Luandan apartment for 30 years, living off vegetables and the pigeons she lures in with diamonds, burning her furniture and books to stay alive and writing her story on the apartment’s walls.
Almost as if we’re eavesdropping, the history of Angola unfolds in A General Theory of Oblivion through the stories of those Ludo sees from her window in a a wild patchwork of a novel, playing on a love of storytelling and fable.
José Eduardo Agualusa, a writer and journalist, is one of the leading literary voices in Angola and the Portuguese language today. His books have been translated into 25 languages. Four of his books have been translated into English: Creole (2002), winner of the Portuguese Grand Prize for Literature; The Book of Chameleons (2006), which won the Independent Foreign Fiction Prize; My father's wives (2008), and Rainy Season (2009). He has received literary grants from the Centro Nacional da Cultura, the Fundação do Oriente, and the Deutscher Akademischer Austausch Dienst. Agualusa has also written four plays: W generation, O monólogo, Chovem amores na Rua do Matador and A Caixa Preta, the last two written with Mia Couto.
Daniel Hahn is the author of a number of works of non-fiction. His translation of The Book of Chameleons by José Eduardo Agualusa won the Independent Foreign Fiction Prize in 2007. He has translated the work of José Luís Peixoto, Philippe Claudel, María Dueñas, José Saramago, Eduardo Halfon, Gonçalo M. Tavares, Corsino Fortes, and others.
Shortlisted for the Three Percent Best Translated Book Award
Winner of the 2019 Angolan National Prize for Culture and Arts

"Like Portuguese writer Fernando Pessoa and Argentine Jorge Luis Borges, Portuguese-Angolan writer José Eduardo Agualusa is a literary trickster who dazzles with his artificial fictional creations... Agualusa is a master of varied genre structure, and he has great fun shifting from spy novel to pastoral narrative to interior reflection, but his heart is deeply invested in his characters, and each individual's story burns itself into the reader to make us reconsider our capacity for empathy and understanding."
—Minneapolis Star Tribune

"A master storyteller...It’s a tribute to Agualusa’s storytelling that the bittersweet redemption found by his characters feels authentic; he and they have earned it."
—Washington Independent Review of Books

"The story challenges what we imagine to be the clearly drawn lines between 'hero' and 'villain' and forces a reconsideration of history and our fictions. It does what the best of literature ought to do: keep us glued to our seats, unable to break away."
—Maaza Mengiste, Words Without Borders

"The story of Ludo bricking herself in her apartment on the eve of Angolan independence and staying there for 30 years had me thinking of our present times. What if being indoors becomes the new normal? Would we deal with it as Ludo does and what world do we then find when eventually we get out? Will it be better? But it’s also a book about the redemptive powers of love and how humanity needs each other. Because although Ludo thinks she is okay being alone, when she finally bonds with Sabalu, a young boy who scales her wall, her life changes."
—Zukiswa Wanner, Mail & Guardian

"Each page brimming with imagination."
—The Irish Independent

"In this tale, based on real-life events, one of Angola’s most inventive novelists has found the perfect vehicle to examine his country’s troubled recent past. . . Alongside Mozambique’s Mia Couto (shortlisted for this year’s Man Booker International), Agualusa has already become one of lusophone Africa’s most distinctive voices."
—Financial Times

"The translation ... is seamless, with the light detachment and readability of Louis de Bernières at his best, but combined with the sharp insights of JM Coetzee ... Agualusa’s writing is a delight throughout, as he opens up the world of Portuguese-speaking Africa to the English-speaking community. And what a world it is."
—The Scotsman

"Hahn is one of our most experienced translators. Such experience shows in tiny interventions to guide the English reader through the chaos of the Angolan battlefield ... and in his taking confident ownership of certain descriptive passages, ensuring the music of the original is conveyed along with the meaning... a timely homage to the prize of Angolan independence."
—The Independent

"A General Theory of Oblivion is both more and less than its title; it certainly provides a kind of blueprint of the encroaching obscurity inherent to living and dying—at times bemoaning its certainty, at times celebrating the assured darkness—but it is also a general theory of love, of life, and, finally, of literature. Working in the fertile ground between fiction, philosophy, and enchantment, Agualusa has accomplished something strange and marvelous here, a whirling dervish of joy and pain, blood and memory, whose many high points I found myself re-reading immediately, eager to experience the shine of the prose like spun gold. It left me in awe of these stories we tell ourselves: those we need to survive, those that change us, and those that change with us."
—Dustin Illingworth, Quarterly Conversation

PRAISE FOR THE BOOK OF CHAMELONS

"Humorous and quizzical, with a light touch on weighty themes, the narrative darts about with lizard-like colour and velocity. Agulausa's delightful novel skitters across minefields with grace and poise."
—Boyd Tonkin, The Independent.

"A book as brisk as a thriller and as hot and alarming as the most powerful kind of dream."
—Michael Pye, author of The Pieces from Berlin

"A work of fierce originality."
—The Independent