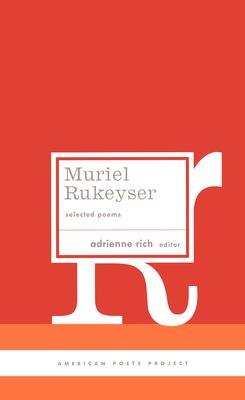 
Backordered
The poetry of Muriel Rukeyser confronts the turbulent currents of 20th-century history, as it explores with depth and honesty the realms of politics, sexuality, mythic imagination, technological change, and family life. She was a social activist of unwavering commitment, a tireless experimenter who opened fresh forms and fresh subject matter in modern American poetry, and a writer who was constantly testing her own limits in a life’s work of extraordinary scope.

“She refused to compartmentalize herself or her work,” writes editor Adrienne Rich, “claiming her right to intellect and sexuality, poetry and science, Marxism and myth, activism and motherhood, theory and vision. . . . She was one of the great integrators, seeing the fragmentary world of modernity not as irretrievably broken, but in need of societal and emotional repair.” This new selection provides an indispensable introduction to her adventurous and prolific work.

About the American Poets Project
Elegantly designed in compact editions, printed on acid-free paper, and textually authoritative, the American Poets Project makes available the full range of the American poetic accomplishment, selected and introduced by today’s most discerning poets and critics.
Adrienne Rich (1929–2012) published nearly twenty volumes of poetry include Fox: Poems 1998–2000; Midnight Salvage: Poems 1995–1998; and Dark Fields of the Republic: Poems 1991–1995. She has received the Bollingen Prize, the Lannan Lifetime Achievement Award, and the National Book Award, among other honors. 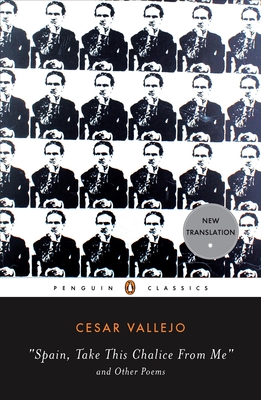 Spain, Take This Chalice from Me and Other Poems: Parallel Text Edition (Paperback)

Cesar Vallejo is one of the best-known Latin American poets of the twentieth century. Challenging, intense, and difficult to translate, Vallejo's work has often been overshadowed by his fervent endorsement of communism. Noted scholar Ilan Stavans tackles the avant- garde poet's politics head-on in an enlightening new introduction that places Vallejo in his proper literary context, while Margaret Sayers Peden's new translation does full justice to Vallejo's complex literary style. Including Spanish and English versions of more than eighty poems that span the arc of his career, this volume is certain to become the leading collection of Vallejo's work for years to come.

For more than seventy years, Penguin has been the leading publisher of classic literature in the English-speaking world. With more than 1,700 titles, Penguin Classics represents a global bookshelf of the best works throughout history and across genres and disciplines. Readers trust the series to provide authoritative texts enhanced by introductions and notes by distinguished scholars and contemporary authors, as well as up-to-date translations by award-winning translators.
Ilan Stavans is Lewis-Sebring Professor in Latin American and Latino Culture at Amherst College and the author or editor of numerous books. 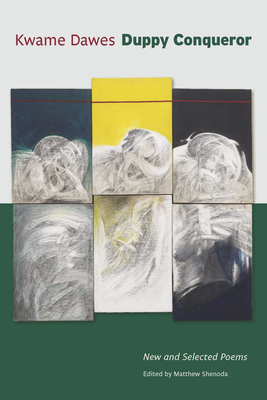 "Dawes's verse has an expressive power and lyric resonance that can be attributed to a trans-Atlantic consciousness weaned on the spiritual sources of reggae."--New York Times Book Review

"Raised in Jamaica, Dawes takes some of his cues, and this book's title, from reggae music. But his voice in these long and short poems and sequences selected from each of his many books, which began appearing in the mid-1990s, is crystal clear, accessible and serious, mixing a timeless myth-making energy with a strong contemporary conscience..." --National Public Radio

"This first U.S. selection from the Jamaica-bred, Nebraska-based poet (he also has a reputation in Britain) is his 16th book of verse in just 20 years; it reveals a writer syncretic, effusive, affectionate, alert to familial joys, but also sensitive to history, above all to the struggles of African diasporic history--the Middle Passage, sharecropper-era South Carolina, the Kingston of Bob Marley, whose song gives this big book its title. Dawes is at home with cityscape and seascape, patois and transatlantic tradition." --Publishers Weekly

Dawes] is highly original and intelligent, possessing poetic sensibility that is rooted and sound, unshakeable and unstopped, both in its vibrancy and direction. He writes poetry as it ought to be written.--World Literature Today

Dawes asserts himself as man and artist and finally, with grace achieved and grace said, sits down to begin life's tragic feast . . . a writer of major significance.--Brag Book

The notion of a reggae aesthetic--of the language moving to a different rhythm, under different kinds of pressure . . . underpins all Dawes' work as poet.--Stewart Brown

Born in Ghana, raised in Jamaica, and educated in Canada, Kwame Dawes is a dynamic and electrifying poet. In this generous collection, new poems appear with the best work from fifteen previous volumes. Deeply nuanced in exploring the human condition, Dawes' poems are filled with complex emotion and consistently remind us what it means to be a global citizen.

Fingers can be trained to make shapes
that, pressed just right on the gleaming
keys, will make a sound that can stay
tears or cause them to flow for days.
Anyone can learn to make some music,
but not all have the heart to beat
out the tunes that will turn us inside out. . .


Kwame Dawes is the author of fifteen collections of poetry, two novels, four anthologies, and numerous essays and plays. In 2009 he won an Emmy Award for his interactive website, LiveHopeLove.com. Since 2011 he has taught at the University of Nebraska, and lives in Lincoln, Nebraska.

Kwame Dawes: Kwame Dawes was born in Ghana in 1962 and moved with his family to Jamaica at the age of ten. He is the author of fifteen collections of poetry, two novels, four anthologies, numerous essays, and has seen fifteen of his plays produced. In 2009 he was awarded an Emmy for his interactive website, LiveHopeLove.com. Since 2011 he has taught at the University of Nebraska as a Chancellor's Professor of English as well as the Editor of Prairie Schooner. He is a Cave Canem faculty member and teaches in the MFA program at Pacific University. He lives in Lincoln, Nebraska. Matthew Shenoda: Matthew Shenoda has coedited four previous anthologies including From the Fishouse: An Anthology of Poems that Sing, Rhyme, Resound, Syncopate, Alliterate, and Just Plain Sound Great (Persea Books, 2009) and Enough: Poets Against the War (Thunder's Mouth Press, 2003). Associate Dean of the School of Fine and Performing Arts at Columbia College Chicago, Shenoda's collection of poetry Somewhere Else (Coffeehouse Press, 2005) was named a 2005 debut book of the year by Poets and Writers and his second collection Seasons of Lotus, Seasons of Bone was published in 2009 by BOA editions. He lives in Chicago, Illinois.