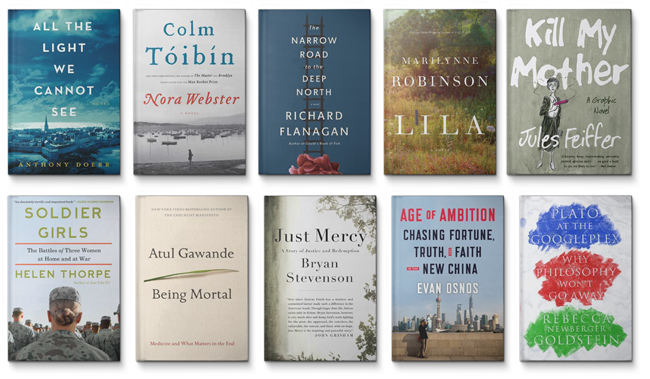 One of our greatest joys—and challenges—each December is to pick roughly 100 books published during the year to feature in the Politics & Prose annual holiday catalog. This year the task of choosing was as difficult as ever, given the number of wonderful books published in 2014. Our staff engaged in hours of vigorous discussion before arriving at a final list, which also includes P&P’s top ten books of the year—five each of fiction and non-fiction. We’re confident the holiday selections will satisfy a wide range of literary tastes and appetites. For starters, here are brief descriptions of P&P’s top 10 books of 2014:

Fiction—
Anthony Doerr’s All the Light We Cannot See, a finalist for the National Book Award, is a stunningly beautiful story of two parallel lives that intersect on the Breton coast during the Nazi occupation of France.

Nora Webster, a literary masterpiece by Irish writer Colm Toibin, recounts the extraordinarily ordinary life of a widow in Ireland at the beginning of the Troubles. Hers is a journey of independence, self-discovery, and learning to live to one’s fullest.

Richard Flanagan’s epic, The Narrow Road to the Deep North, winner of the Man Booker Prize, has numerous literary and poetic subtexts and features an appealing, if roguish, protagonist whose life tells the tale of Australians held as prisoners of war by the Japanese in World War II.

Lila, the latest novel from Marilynne Robinson, is the third in a trilogy but actually a prequel to the first two, Home and Gilead. Lila’s struggle for moral clarity in the face of questions about her own parentage and abandonment lead her to an unlikely union with a much older man.

The incomparable Jules Feiffer has produced his first noir graphic novel, Kill My Mother, that pays tribute to the crime fiction and newspaper adventures strips he loved as a teenager. The book’s settings—in the Depression era and such locales as Bay City and Hollywood—are classic, as are many of the characters and plot twists. But Feiffer has his own fun with the traditional genre.

Non-Fiction—
Soldier Girls: The Battles of Three Women at Home and at War by Helen Thorpe is an important addition to contemporary journalism about the human costs of the war on terror. This remarkable book explores the experiences of three women who join the Indiana National Guard before 9/11 and find their lives dramatically changed after they wind up serving tours in Afghanistan and Iraq.

The doctor-writer-commentator Atul Gawande has become known as the conscience of our health care system, and his latest book, Being Mortal: Medicine and What Matters in the End¸ is a clear-eyed, provocative, and compassionate examination of the medical practices and values that dominate care at the end of life.

Bryan Stevenson has made a career defending those on the fringes of the legal system and has crusaded to end mandatory life sentences for children. In Just Mercy: A Story of Justice and Redemption, he traces his own childhood and career and exposes some of the raw truths about our criminal justice system.

Age of Ambition: Chasing Fortune, Truth, and Faith in the New China by Evan Osnos won the National Book Award for non-fiction and is a testament to the writing and reportorial skill of the author. Through stories about ordinary and extraordinary Chinese people, Osnos, a staff writer for The New Yorker, paints a complex and compelling portrait of China today.

Rebecca Newberger Goldstein is best-known as a novelist but is also a student and scholar of philosophy. Her book, Plato at the Googleplex, makes an energetic and entertaining case that philosophy is still essential in today’s world.

For more information about these works, as well as a complete list of the titles included in our holiday catalog, click here or pick up a physical copy in the store. The catalog also includes recommendations for the best CDs of the year and some of our favorite non-book gift items and stocking stuffers. Happy holidays!