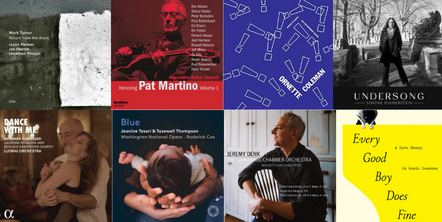 Mark Turner, RETURN FROM THE STARS (ECM, $18.98) – Tenor saxophonist Mark Turner returns with his first album as a leader since 2014’s The Lathe of Heaven (his many recent collaborations include  those with Billy Hart, Tom Harrell, and Ethan Iverson).  Mr. Turner’s quartet includes pianist Jason Palmer, bassist Joe Martin, and drummer Jonathan Pinson.

HONORING PAT MARTINO, Vol. 1 (HighNote, $16.98) – Pat Martino, who died in November, 2021, was certainly a guitar master. Before his passing, the 14 guitarists of the Alternative Guitar Summit paid tribute by playing his tunes. In solo and duet performances, the guitarist from the next generations include Peter Bernstein, Paul Bollenback, Russell Malone, Sheryl Bailey, Kurt Rosenwinkel, Dave Stryker, Fareed Haque, Ed Cherry, and Joel Harrison (who produced the tribute).

Ornette Coleman, GENESIS OF GENIUS: THE CONTEMPORARY ALBUMS (Craft, 2 CDs, $25.98) – Before his iconic albums on the Atlantic label, Ornette released two albums on Contemporary Records: Something Else!!!!: The Music of Ornette Coleman (1958) and Tomorrow is the Question (1959) containing some of his most iconic tunes: “The Blessing,” “When Will the Blues Leave?,” “Turnaround,” and “Rejoicing.” The players include Don Cherry, trumpet (on both albums), Don Payne, Walter Norris, Billy Higgins (Something Else), and Percy Heath, Red Mitchell, Shelly Manne (Tomorrow).

Simone Dinnerstein, UNDERSONG (Orange Mountain, $21.98) – This is the third album recorded by Ms. Dinnerstein since the pandemic began. In music by Philip Glass, Robert Schumann, François Couperin and Erik Satie, she explores musical forms that have refrains. In her words, “Undersong is an archaic for a song with a refrain, and to me it also suggests a hidden text. [The four composers] all seem to attempting to find what they want to say through repetition, as though their constant change and recycling will focus the ear and the mind. This is music to get lost in.”

As on dance records of the past, each titled work includes the dance type (slow-fox, cha-cha, salsa, Viennese and English waltz, tango, rumba, one-step).

Jeanine Tesori & Tazewell Thompson, BLUE (Pentatone, 2 CDs, $29.99) – The production of Blue by the Washington National Opera was one of the many Covid cancellations. The new opera, with music by Jeanine Tesori (Fun Home, Caroline, or Change) and a libretto by Tazewell Thompson, “tells the story of  a Black police officer whose son is killed by a fellow officer during a protest.”

The production was recorded by The Washington National Opera Orchestra, conducted by Roderick Cox.

Pianist Jeremy Denk’s wonderful and heartfelt memoir, EVERY GOOD BOY DOES FINE: A Love Story, in Music Lessons (Penguin, $28), was just published. The memoir focuses on the many teachers throughout his life, most significantly, György Sebók, at Indidana University. Highly recommended reading.