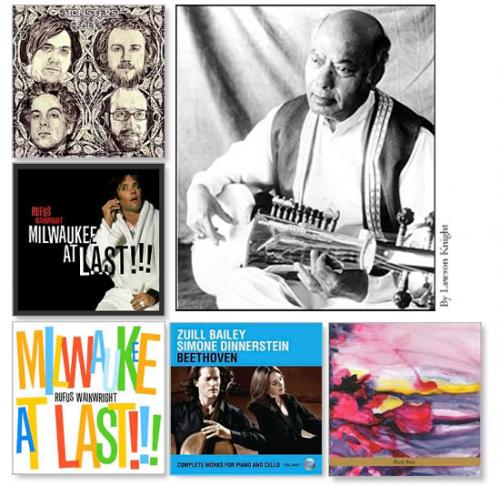 TIM PAGE & GLENN GOULD
Last Saturday at P&P, I introduced former Washington Post music critic Tim Page and his new book, Parallel Play. Mr. Page read two excerpts from the book, and he had an invigorating Q and A with the audience, both about his life in music, and his lifelong battle with Asperger’s Syndrome. He mentioned his many conversations with pianist Glenn Gould, and their immediate bond. You can hear Mr. Page and Mr. Gould discuss the two versions of the Goldberg Variations on a bonus disc that comes with A STATE OF WONDER: THE COMPLETE GOLDBERG VARIATIONS, 1955 & 1981 (Columbia, 3 CDs, $19.98).

Rufus Wainwright, MILWAUKEE AT LAST!!! (Decca, CD, $13.98 or CD/DVD with bonus tracks, $27.98)—Speaking of exclamation marks, Rufus Wainwright definitely deserves all three that title his latest, a live CD and DVD package (they can be bought individually or as a package). Rufus—a chanteur and songwriter who just completed his first opera—is a dynamite showman, and this concert is a treat.

David Taylor will join the Post-Classical Ensemble in a program of Schubert, Stravinsky, and new compositions for Mr. Taylor by Daniel Schnyder next Thursday, Oct. 1, at the Shakespeare Theater’s Harman Center.

R.I.P. ALI AKBAR KHAN
Ali Akbar Khan passed away in June. He was the world’s foremost sarod player—introducing this hard-to-master lute-like Indian instrument around the world. He appeared on Alistair Cooke’s Omnibus program in the 1950s, concertized with Ravi Shankar, and taught two generations about Indian music at his College of Music in Berkeley, which he opened in 1967. Hear him perform “Raga Madhuvanti” on PEERLESS (Navras, $17.98).