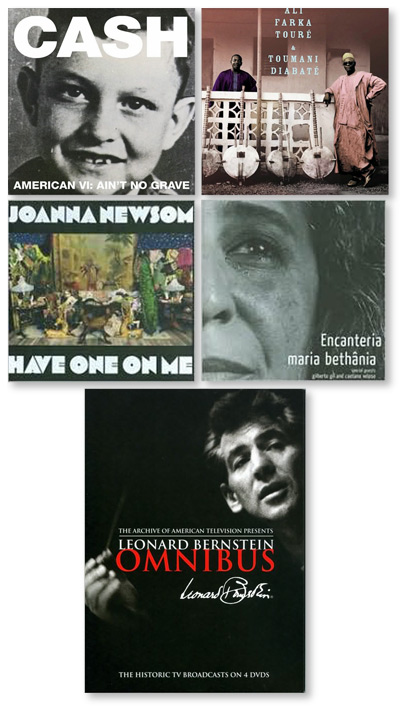 Johnny Cash started his “American Recordings,” in 1994. Cash and producer Rick Rubin chose intriguing old and new songs – many on the subject of death -- in stripped-down acoustic settings, and Cash delivered some of the most powerful performances of his career. The New York Times commented that the series of recordings “constitutes probably the most noteworthy and effective discussion of life’s end in recent popular culture.” AMERICAN VI: AIN’T NO GRAVE (American Recordings, $10.98) is the final chapter, and Cash singing the title song, “For the Good Times,” “I Don’t Hurt Any More,” and ends (chosen by Mr. Cash) with the traditional Hawaiian song from the 1870s, “Aloha Oe.”

Guitarist Ali Farka Touré was a pioneer in translating the traditions of northern Malian string instruments to the acoustic and electric guitar, and created an innovative bluesy style that influenced many. His last album, a second collaboration with kora player Toumani Diabate, ALI & TOUMANI (Nonesuch, $17.98) is lovely summation of his work, mixing songs from the Mandé, Peul, Songhai traditions old and new, plus a couple of studio meditative improvisations. Highly recommended.

NEW
Joanna Newsom, HAVE ONE ON ME (Drag City, 3 CDs, $22.98) – Harpist and singer Joanna Newsom delivers her magnum opus: a 3-CD set of original songs, alternating voice-and-harp tunes with larger scale arrangements. Get to know Ms Newsom – she’ll also be at the 6th & I Synagogue March 22 and 23.

Maria Bethânia, ENCANTERIA (DRG, $13.98) – Maria Bethânia’s voice is amazing: fans in Brazil and elsewhere have adored her dark, husky mezzo ever since the Tropicalia movement of the late 1960s. Encanteria is a wonderful introduction to her work; on one song, she features Gilberto Gil, and her brother, Caetano Veloso.

LEONARD BERNSTEIN ON OMNIBUS
There was a time – the fifties and early sixties – when network television produced high-caliber cultural programming. Omnibus, hosted by Alastair Cooke, was one of those programs, and it was the first television platform for Leonard Bernstein, before his famous Young People’s Concerts. LEONARD BERNSTEIN: OMNIBUS (E1 Entertainment, 4 DVDs, $49.98) collects all of his appearances on four DVDs. Check out the New York Times article (http://www.nytimes.com/2010/02/16/arts/music/16bernstein.html ), which includes two great clips of Lenny talking about Puccini and the poetry of the blues.