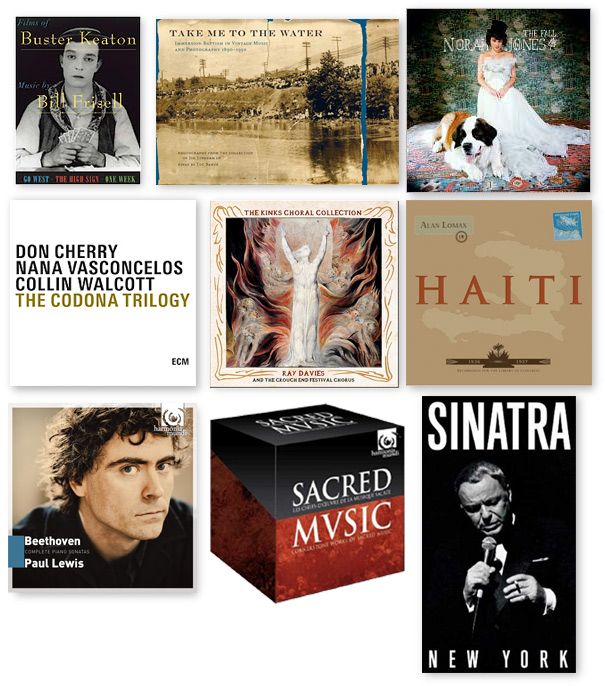 BILL FRISELL PLAYS FOR BUSTER KEATON
My favorite guitarist playing his scores for my favorite film comedian: this is the music DVD of the year.
Electric guitarist Bill Frisell’s melodic and witty playing always has cinematic and narrative possibilities. He’s been playing his scores to Buster Keaton’s brilliant silent films in live settings for over a decade, but now the films and music are finally together in a single package. FILMS OF BUSTER KEATON/MUSIC BY BILL FRISELL (Songline/Tone Field Productions, DVD, $29.98) brings together the feature, Go West, with two shorts, The High Sign and One Week. Keaton’s gems are matched by Frisell’s perfect cues and tunes, with his crack trio: Kermit Driscoll on bass, and the very inventive Joey Barron on drums, hitting rim-shots and dropping bass-drum bombs with abandon.

This DVD will be in our Holiday Newsletter, and P&P members get 15% off—this title is not available on Amazon or Barnes & Noble.

NEW FROM DUST TO DIGITAL

The good folks at Dust to Digital have just issued a beautiful book and CD package.
TAKE ME TO THE WATER: Immersion Baptism in Vintage Music and Photography, 1890 - 1950 (Dust to Digital, book & CD, $37.98). The 96-page hardcover book has 75 sepia photograph reproductions from the collection of Jim Linderman, and an essay by Luc Sante. It’s accompanied by a CD of rare gospel and folk recordings from 1924-1940, featuring Washington Phillips, the Carter Family, the Tennessee Mountaineers, plus examples of period sermons and preaching.
We also currently have in stock Dust to Digital’s widely-praised gospel box set, GOODBYE BABYLON (6 CDS, $109.98), and one of my favorite Christmas albums, WHERE WILL YOU BE CHRISTMAS DAY: 24 Recordings from 1917-1959 ($16.98), compiled by archivist and WAMU DJ, Dick Spottswood.

Norah Jones, THE FALL (Blue Note, $17.98)—Ms Jones brings in more electric keyboards and guitars for a fuller and “swampier” sound to surround her distinctive vocals.

Ray Davies, THE KINKS CHORAL COLLECTION (Decca, $17.98)—Arrangements for Davies and his band plus chorus of some of the greatest Kinks songs, including “Days,” “Waterloo Sunset,” and six from The Village Green Preservation Society.

THE CODONA TRILOGY (ECM, 3CDs, $32.98)—Sitarist and tabla player Colin Walcott (from the group Oregon), trumpeter and multi-instrumentalist Don Cherry (from Ornette Coleman’s original quartet), and percussionist Nana Vasconcelos collaborated as Codona—the group’s name came from the first two letters of their first names—and recorded three marvelous albums between 1978 and 1982. They combined jazz improvisation with a whole array of traditional instruments to create a sound that transcended “world music,” and that is still fresh and vital today.

Paul Lewis, BEETHOVEN: COMPLETE PIANO SONATAS (Harmonia Mundi, 10 CDs, $89.98)—These performances received raves when they appeared in four volumes in the last four years: Volume 4 won Gramophone’s Recording of the Year. They are now available in one package.

SACRED MUSIC (Harmonia Mundi, 30 CDs, $99.98)—Thirty(!) CDs of complete sacred works by Bach, Beethoven, Brahms, Palestrina, Handel, and many, many more, conducted by some of the best in music: René Jacobs, William Christie, Philippe Herreweghe, Paul Hillier, and others.