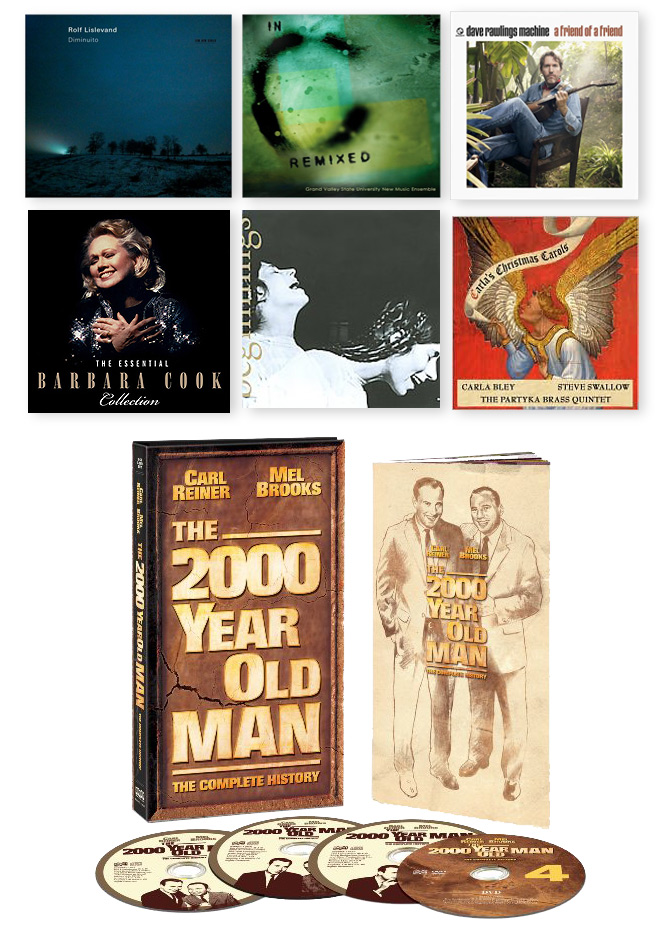 I put together a list of some of my favorite CDs of the year (plus often-played staff favorites), as well as new and favorite Holiday CDs (here).

You can also check the New York Times’ Best Classical picks -- I have many of these recording on display, with reviews. There’s also a list for box sets and Holiday titles

Rolf Lislevand, DIMINUITO (ECM, $17.98)—This is one of the loveliest CDs of the year, programmed around Italian Renaissance pieces which used “diminutions, divisions, or glosas” (embellishing a melody by overlaying faster second melody). Lutenist Lislevand has gathered some of the finest players (harps, chitarras, vihuelas, clavichord, percussion) and singers to play these works. This was also on the New York Times Best Classical list.

IN C REMIXED (Innova, 2 CDs, $16.99)—Last year, Michigan’s Grand Valley State University New Music Ensemble scored a hit with their recording of Steve Reich’s Music for 18 Musicians. They recorded another minimalist masterwork, Terry Riley’s In C, and handed it to leading performers, composers, and DJs to remix. The result is 18 fascinating takes on In C by, among others, Glenn Kotche, Jad Abumrad, Nico Muhly, DJ Spooky, David Lang, and Daniel Bernard Roumain.

David Rawlings, FRIEND OF A FRIEND (Acony, $13.98)—Singer Gillian Welch has always maintained that “Gillian Welch” was really a duet, an equal partnership between herself and singer/guitarist David Rawlings. Now Friend of a Friend finally puts Rawlings in the foreground (with vocal help from Welch, of course). Great Welch/Rawlings songs like “Ruby,” “It’s Too Easy,” “Bells of Harlem,” as well as a few choice covers—for example, a mash-up of Conor Oberst’s “Method Acting” and Neil Young’s “Cortez the Killer—make this one very special.

MEREDITH MONK
Meredith Monk created a new vocabulary for vocalists, as well as creatively combining choreography, theatre, and film in her work. Alex Ross wrote a nice piece about her in the New Yorker a few weeks back. There is a new archival collection of Monk’s vocal works, BEGINNINGS (Tzadik, $15.98), selected by Monk herself, going back to solo pieces in the 1960s, as well as group pieces from the 1970s. Don’t forget her 1981 album, DOLMEN MUSIC (ECM, $17.98) and her latest, IMPERMANENCE (ECM, $17.98).

BOX SETS III
Barbara Cook, THE ESSENTIAL BARBARA COOK (DRG, 5 CDs & 1 DVD, $49.99)—Barbara Cook is considered the best singer of Broadway tunes working today. This is a great overview of her career over the last 17 years. This mid-priced box includes the complete CDs, All I Ask of You; Live from London; Dorothy Fields: Close As Pages in a Book; At the Met with Special Guests; and the DVD, Mostly Sondheim. There is also a bonus CD of four tracks from Barbara’s upcoming album, Give Me the Simple Life.

Carl Reiner & Mel Brooks, THE 2000 YEAR OLD MAN: The Complete History (Shout Factory, 3 CDs & 1 DVD, $59.98)—What started as an inspired party routine ended up as one of the greatest improvisatory comedy routines of all time, bringing out the very best of Reiner and Brooks. The set contains the five comedy albums the duo recorded, and the DVD contains new interviews, plus appearances from the Ed Sullivan and Steve Allen shows.