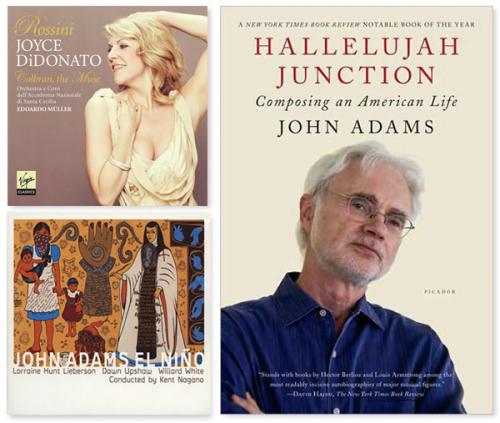 EL NIÑO BY JOHN ADAMS
Reading a review of a live performance of El Niño (here, http://www.nytimes.com/2009/12/15/arts/music/15nino.html?ref=music ) reminded me how perfect this oratorio is for the Christmas season—and why I have the CD on the P&P holiday music display every year. EL NIÑO (Nonesuch, 2 CDs, $29.98) has soprano Dawn Upshaw, mezzo Lorraine Hunt Lieberson, baritone Willard White, three countertenors, an adult and children’s choirs, plus the Deutsches Symphonie-Orchester Berlin—all under the direction of Kent Nagano. Its very literary libretto mixes poetry by Sor Juana, Rosario Castellanos and Gabriela Mistral with passages from the Bible, New Testament Apocrypha, and English Mystery Plays. This is a very special work.

ALEX ROSS’S TOP 10
One year ago, we had John Adams at the store for Hallelujah Junction; two seasons ago, Alex Ross, the classical music critic of the New Yorker, appeared for his history of 20th-century music, The Rest is Noise.
Here are his favorites from the last year; check out his great music blog, Unquiet Thoughts (http://www.newyorker.com/online/blogs/alexross/ ).