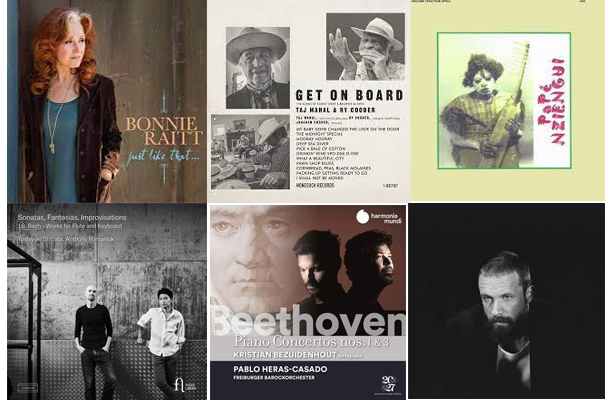 Bonnie Raitt, JUST LIKE THAT (Redwing, $16.98) – Bonnie Raitt came out of the sixties blues/folk circuit, and kept writing great original songs, delivered with authority. She finally crossed over to a huge audience with Nick of Time (1989). Six years after her wonderful Dig in Deep, Bonnie Raitt and her long-time band return with new songs. NOTE: Bonnie Raitt will be at Wolf Trap (with Lucinda Williams opening) on June 10 and 11. Last week, Nick of Time was one of the 25 songs and broadcasts added to the Library of Congress’s annual National Recording Registry.

Taj Mahal & Ry Cooder, GET ON BOARD: The Songs of Sonny Terry and Brownie McGhee (Nonesuch, $15.98) – Taj Mahal and Ry Cooder were both deeply influenced by hearing and seeing the Piedmont blues duo of guitarist Sonny Terry and harmonica player Brownie McGhee in the early 1960s. After playing together in the late 1960s in the Rising Sons, they’ve reunited to pay homage to Sonny and Brownie. They offer their versions of many Sonny and Brownie songs, many heard on the 1952 album, Get On Board. Some of the classic songs include “Oh What a Beautiful City,” “Hurray Hurray,” “I Shall Not Be Moved,” “The Midnight Special,” and “Drinking Wine Spo-Dee-O-Dee” (written by Brownie’s brother, “Sticks” McGhee).  Honoring the trio sound of the original Get On Board, Taj (vocals, harmonica, guitar, and piano) and Ry (vocals, guitar, mandolin, and banjo) are accompanied Ry’s son, Joachim (percussion, bass).

We also have copies of the original, GET ON BOARD: Negro Folksongs by the Folkmasters (Smithsonian Folkways, $16.98) (1952), by Sonny Terry and Brownie McGhee, with Coyal McMahan on maracas.

Papé Nziengui et Son Groupe, KADI YOMBO (Awesome Takes from Africa, $15.98) – A re-issue of a historic, even “radical” album from Gabon. The Bwiti ritual ceremony of the Mtsogo (or Tshogho) people features the mungongo (mouth bow) and ngombi (harp). “Ngombi master Papé Nziengui mixed ritual with commerce when he released Kadi Yombo in 1989. Here, on tracks such as “Ngonde,” furious harp and mouth bow accompany Nziengui’s lead vocal, which is answered by a female chorus.” But, on half the album, Nziengui also added “drum machines, electric bass throb, and synths, rendering the ceremonial as dance floor pulse.” The hypnotic propulsiveness mixed with the call-and-response vocals are infectious. Quotes are from Bruce Miller’s review in Roots World (which also has sound clips and a video).

SONATAS, FANTASIAS, IMPROVISATIONS: J.S. Bach—Works for Flute and Keyboard (Fuga Libera, $18.99) – Flute player Toshiyuki Shibata and Anthony Romaniuk (playing harpsichord and fortepiano) are both expert improvisers, and seek to bring back to Bach the improvisatory and ornamental impulses that were basic in his era. Shibata and Romaniuk play two Flute Sonatas, and improvise on two Fantasias.

BEETHOVEN: PIANO CONCERTOS NOS. 1 & 3 (Harmonia Mundi, $19.98) – Kristian Bezuidenhout, playing the fortepiano, and the period-instrument Freiburg Baroque Orchestra, conducted by Pablo Heras-Casado, are back with their third album of Beethoven. Another fresh look at the piano concertos.

To order CDs,  for questions and suggestions, special orders,  or to join the CD/Book of the Month Program,  please email me directly: agoldinger@politics-prose.com