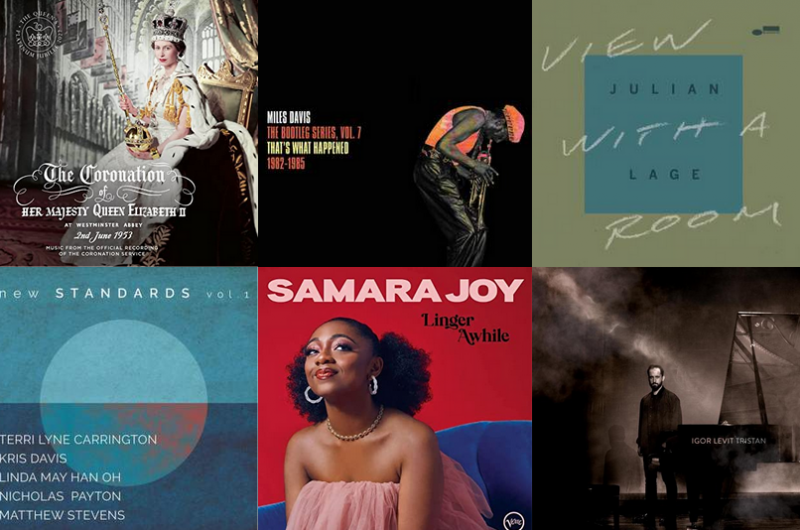 ELIZABETH II: MUSIC FROM THE 1953 CORONATION

THE CORONATION OF QUEEN ELIZABETH II AT WESMINSTER ABBEY: Music from the Official Recording (Warner Classics, $14.98) – To commemorate the The historic coronation of Elizabeth II The BBC recording of the coronation service on June 2, 1953 was made with a direct line to Abbey Road studios. The 400-strong Coronation Chorus was made up from members from the choirs of Westminster Abbey, HM Chapel Royal, St George's Chapel, Windsor, and St Paul's Cathedral. There was music from previous coronations and new compositions written especially for the service, and featured a full orchestra, and the grand organ of Westminster Abbey.

Samara Joy, LINGER AWHILE (Verve, $14.98) – Even though she is only 22 years old, Samara Joy sings with the confidence and personality of a veteran. In 2019, Ms. Joy won the Sarah Vaughan Vocal Competition, and she released her debut album last year (I included it on my best-of list). Now, with Linger Awhile, she’s jumped to a major label.

She’s accompanied by guitarist Pasquale Grasso (her most frequent accompanist), Ben Paterson on piano, David Wong, bass, and Kenny Washington. Songs include “Misty,” “Guess Who I Saw Today,” and “Someone To Watch Over Me.” following the footsteps of vocalese pioneer Jon Hendricks, Ms. Joy has written lyrics to solos by Fats Navarro, Lester Young. She also covers “Social Call” written by Hendricks and Gigi Gryce, and unearths a rare Sarah Vaughan gem, “Can’t Get Out Of This Mood.” Ms. Joy also makes an appearance on New Standards Vol. 1 (see below).

Igor Levit, TRISTAN (Sony Classical, 2 CDs, $18.98) – After last year’s monumental On DSCH: Dmitri Shostakovich/Ronald Stevenson, the pianist unveils a new project. Levit begins and ends the recital with Franz Liszt (the Liebestraum No. 3 and one of the Transcendental Études). The first CD’s focus is Hans Werner Henze’s Wagner, for piano, tape, and orchestra. On the second CD, there is Richard Wagner (arranged by Zoltán Kocsis), Mahler (arranged by Ronald Stevenson), and the Liszt. The orchestral work feature the Gewandhaus Orchestra, conducted by Franz Welser-Most

NOTE: Igor Levit will be at the Kennedy Center on October 20.