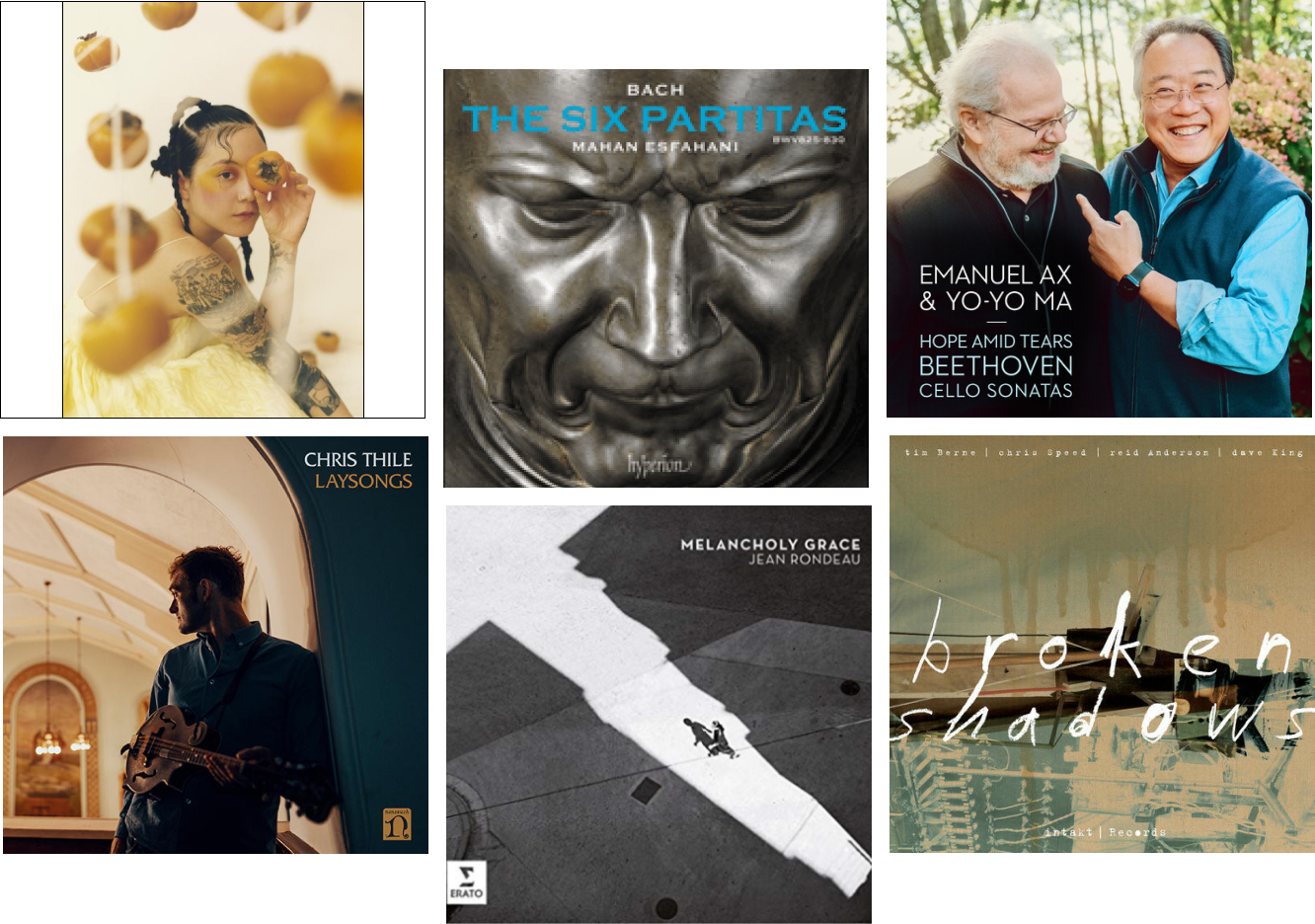 Chris Thile, LAYSONGS (Nonesuch, $15.98) – Mandolin wizard Chris Thile, while a great collaborator (the Punch Brothers, Nickel Creek, Yo-Yo Ma’s Goat Rodeo Project, Live from Here) goes solo here, in an album recorded during the pandemic. The centerpiece is a three-part “Salt (in the Wounds) of the Earth, inspired by

The Screwtape Letters. There are also renditions of songs by Buffy Sainte-Marie, Hazel Dickens, as well as works by Bartók and Bach.

NOTE: Chris Thile will be live at Wolf Trap this summer on July 24 and 25.

BEETHOVEN: CELLO SONATAS, “HOPE AMID TEARS” (Sony Classical, 3 CDs, $20.98) –Yo-Yo Ma and Emanuel Ax have had a musical partnership for over 40 years, and dozens of albums. They first recorded the Beethoven Sonatas for Cello and Piano in 1987. Now, they have brought new perspective on the five Sonatas, and also added Beethoven’s other works for cello and piano—three sets of variations: on “Bei Mannern, welche Liebe fuhlen,” on a Theme from Handel’s Judas Maccabaeus, and on “Ein Madchen oder Weibchen.”

Japanese Breakfast, JUBILEE (Dead Oceans, $15.98) – Writer and musician Michelle Zauner has a new, bestselling memoir out, Crying in H Mart (Knopf). She has also had a parallel music career, under the moniker, Japanese Breakfast. On her third album, in her words, Ms. Zauener “wanted to re-experience the pure, unadulterated joy of creation…The songs are about recalling the optimism of youth and applying it to adulthood…”

Tim Berne, BROKEN SHADOWS (Intakt, $20.98) – Tim Berne has assembled a new group, Broken Shadows, with two saxophones (Berne on alto, and Chris Speed on tenor) and the Bad Plus rhythm section (Reid Anderson, bass, and Dave King, drums), devoted to the music of Ornette Coleman, Dewey Redman, Charlie Haden and Julius Hemphill. As Berne says, “Most all of the songs have melodiese: infectious and sing-able.” And Branford Marsalis adds in the liner notes: “…the tracks range from lamentation, or insouciant swagger, to utter joy, and all the colors in between.” Listen to classics like “Una Muy Bonita,” the title tune, “Broken Shadows,” “Song for Che,” “Walls-Bridges,” and “Dogon A.D.”

Both Jean Rondeau and Mahan Esfahani are two of the young harpsichordists on the scene bringing new life to the instrument. Each has a new album:

BACH: THE SIX PARTITAS (Hyperion, $19.98) – As Mr. Esfahani says in his in-depth liner notes, the Six Partitas was a “project of public self-definition by a composer announcing himself to his peers and to those courageous enough to try their hand at playing the music.”