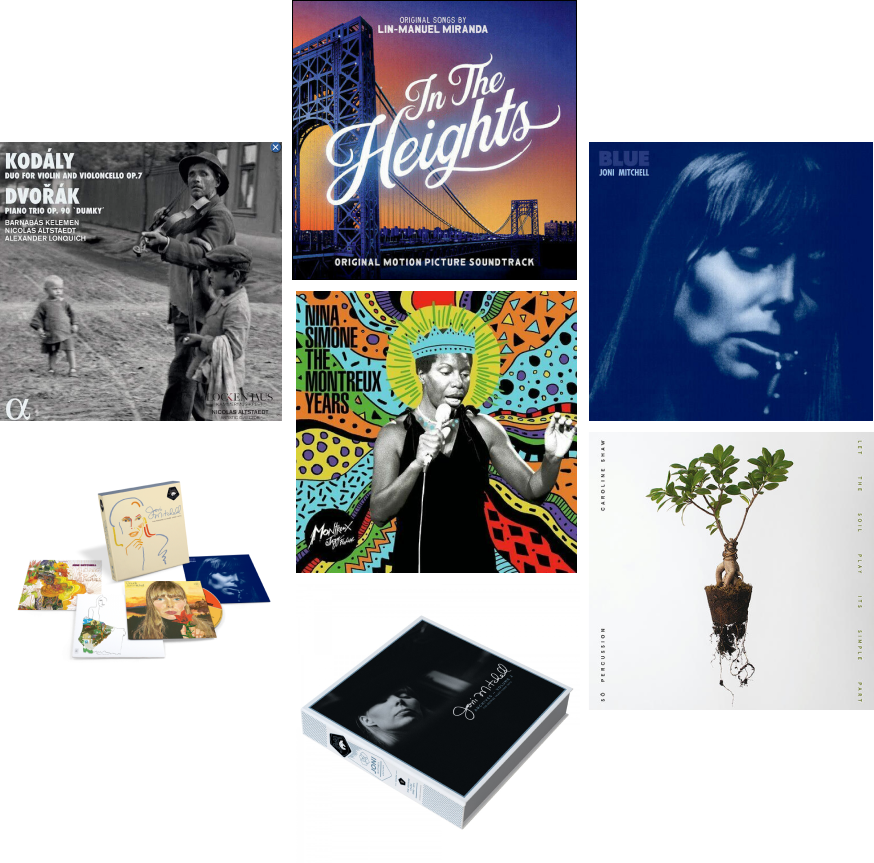 Nicolas Altstaedt & Friends, KODÁLY: DUO & DVOŘÁK: TRIO (Alpha, $18.99) – Cellist Nicolas Altstaedt is the Artistic Director of the Lockenhaus Chamber Music Festival, which started in 1974, and is most famously associated with former director, Gidon Kremer. An outgrowth of the festival are the (now) two recordings Altstaedt has made with attending musical colleagues.

Now, she takes on the vocals herself, in new tunes written in the studio, in collaboration with So Percussion. The songs have lyrics “inspired by their own wide-ranging interests: James Joyce, the Sacred Harp hymn book, a poem by Anne Carson, the Bible’s Book of Ruth, the American roots tune “I’ll Fly Away,” and the pop perfection of ABBA, among others.”

This past Tuesday was the 50th anniversary of the release of Joni Mitchell’s BLUE (Reprise, $12.98). This hallmark of the singer/songwriter era has influenced many songwriters and singers ever since, not to mention musicians across other genres.

As well as the lyrics, the subtle musical landscape that Joni Mitchell created—strong rhythms driven by dulcimer, with subtle guitar and percussion layers, alternating with her piano ballads—sound as distinct today as in 1971.

IN THE HEIGHTS and SUMMER OF SOUL AT THE AVALON

Recently, I wrote about the soundtrack to IN THE HEIGHTS: Original Soundtrack (Atlantic, $18.98), the movie adaptation of the Broadway musical by Lin-Manuel Miranda and Quiara Alegría Hudes.