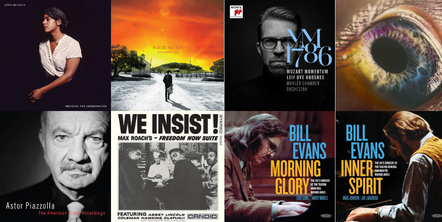 Leyla McCalla, BREAKING THE THERMOMETER (Anti, $12.98) – Leyla McCalla has produced very original albums, such as Vari-Colored Songs, which set some Langston Hughes poems to music, as well as exploring her Haitian roots. She was also one of the four women in Rhiannon Giddens’s collaborative Songs of Our Native Daughters project.

Breaking the Thermometer is a very special project: “Radio Haiti, the first independent radio station to report the local news there in Haitian Kreyol. Active from 1957 to 2003, the station became a hub of Haitian politics, society and culture…Upon acquiring the archives, Duke commissioned Leyla McCalla to create a multi-disciplinary theater project with them, which became Breaking the Thermometer. The album combines original compositions and traditional Haitian tunes with historical broadcasts and contemporary interviews to forge an immersive sonic journey through the tumult of social and political unrest in late 20th century Haiti.”
Ms. McCalla states, “While many of the songs on the album are inspired by the listening that I have done in the archive, much of the album is deeply self-reflective—integrating experiences that I have had navigating life as a child both in the US and Haiti, my journey in claiming my Haitian-American identity and understanding the experiences, sacrifices and challenges overcome by my immigrant relatives.”

Willie Nelson, A BEAUTIFUL TIME (Sony Legacy, $14.98) – Willie Nelson is turning 89, and going strong: A Beautiful Time includes five new Willie Nelson/Buddy Cannon tunes, a tune each by Rodney Crowell and Chris Stapleton, plus choice covers of Leonard Cohen (“Tower of Song”) and Lennon/McCartney (“With a Little Help from My Friends”).

Leif Ove Andsnes, MOZART MOMENTUM 1786 (Sony Classical, 2 CDs, $18.98) – Pianist Leif Ove Andsnes and the Mahler Chamber Orchestra present their follow-up to Mozart Momentum 1785, examining Mozart’s “reinventing the nature of the piano concerto.” Andsnes bookends the Piano Concertos Nos. 23 and 24 with the Piano Quartet No. 2, the Piano Trio No. 3, Rondo in D major K 485, and the Recitative and Aria (Rondo) K 505.

Arcade Fire, WE (Columbia, $14.98) – The return of the epic sounds of Arcade Fire, led by Win Butler and Régine Chassagne.

In the 1980s, Piazzolla recorded three albums on Kip Hanrahan’s American Clavé label that have become classics (and hard to find). Now Nonesuch has released them in a box set:

WE INSIST! MAX ROACH’S FREEDOM SUITE NOW (Candid, 15.98) – Last month, the Library of Congress announced that Max Roach’s We Insist! (1960) was one of the 25 recorded artifacts added to the yearly National Recording Registry, started in 2002.

Two never-before-issued Bill Evans concerts have just been issued by Resonance Records, with their usual deluxe packaging, full of notes, photos, and interviews.

To order CDs, for questions and suggestions, special orders,  or to join the CD/Book of the Month Program,  please email me directly: agoldinger@politics-prose.com