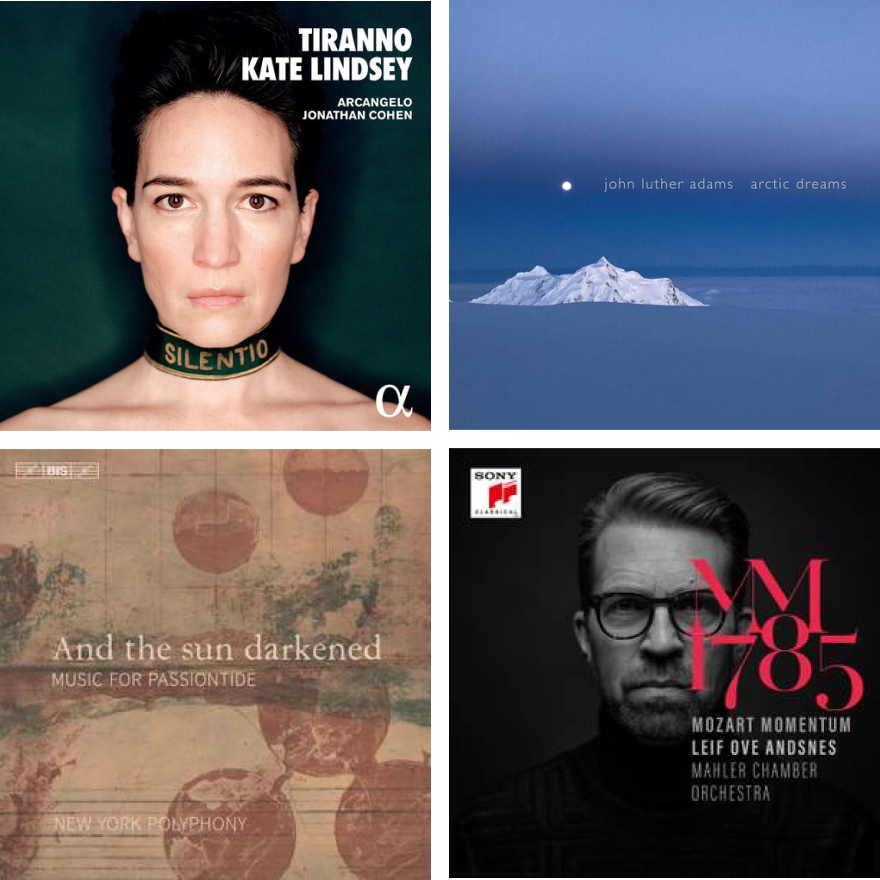 Leif Ove Andsnes, MOZART MOMENTUM 1785 (Sony Classical, 2 CDs, $18.98) – Leif Ove Andsnes begins a two-album exploration of the crucial years 1785 and 1786, when Mozart was “reinventing the nature of the piano concerto…he began to re-examine the roles of the soloist and the orchestra, developing aspects of communication and dialogue…in a way that had not been heard before.” Andsnes directs the Mahler Chamber Orchestra from the piano in the Concerto for Piano and Orchestra Nos. 20, 21, and 22; the Fantasia in C minor; Quartet for Piano, Violin, Viola, Cello No. 1; and the Masonic Funeral Music.

Kate Lindsey, TIRANNO (Alpha, $18.99) – The mezzo-soprano’s album is centered on arias taken from operas about Nero, his mother, Agrippina, and his wives, Poppea and Octavia. Singing arias by Scarlatti, Handel, Monteverdi, Ms. Lindsey is accompanied by the ensemble, Arcangelo, directed by Jonathan Cohen, and helped by soprano, Nardus Williams, and tenor, Andrew Staples.

JOHN LUTHER ADAMS: ARCTIC DREAMS (Cold Blue, $16.99) – A new suite dedicated to nature writer Barry Lopez—and titled after his most famous book—is written for a quartet of voices (Synergy with two sopranos, alto, and bass), a quartet of strings (violin, viola, cello, bass), and “three levels of digital delay.” As Adams writes: “ the string sounds are produced by natural harmonics and open strings…the sung text…names of Arctic places, plants, birds, weather, and the seasons, in the languages of the Inupiat and Gwich’in peoples of Alaska.”