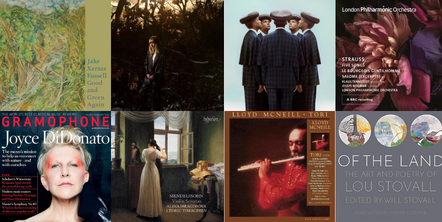 Jake Xerxes Fussell, GOOD AND GREEN AGAIN (Paradise of Batchelors, $14.98) – Jake Xerxes Fussell is a folk musician based in North Carolina. Besides finding songs through fellow artists and archival sources, Fussell also writes originals, and delivers them in low-key style. On Good and Green Again, he also does a couple of fingerpicking instrumentals, and the backing band includes strings and subtle horns.

The Weather Station, HOW IS IT THAT I SHOULD LOOK AT THE STARS (Fat Possum, $15.98) – A companion to last year’s album, Ignorance, with more songs from those sessions.

MENDELSSOHN: VIOLIN SONATAS (Hyperion, $19.98) – The long-time team of violinist Alina Ibragimova and pianist CédricTeberghien play Mendelssohn’s violin sonatas written in 1820, 1823, and 1838 (and end with an incomplete sonata in D).

We just received our January and February issues of Gramophone Magazine from the U.K. There are the usual informative profiles, recording session reports, and plenty of review of the best in classical music.

Lou Stovall is a DC institution—artist, poet, and founder of the silkscreen studio, the Workshop in 1969. Besides his own work, he collaborated and printed work by other artists, and made many posters for local and touring musicians.

He’s now the subject of an exhibition at the Kreeger Museum through April 30, called Lou Stovall: On Invention and Color.

There is also a new book, Of the Land: Art and Poetry of Lou Stovall (Georgetown University Press, $29.95)

Mr. McNeill’s recordings are being reissued; the most recent is TORI (Soul Jazz, $23.99), originally issued on Mr. McNeill’s Baobab label in 1978.

The album features such Brazilian musicans as Dom Um Ramao, Nana Vasconcelos, and Dom Salvador, as well as Howard Johnson on tuba, and Buster Williams on bass.