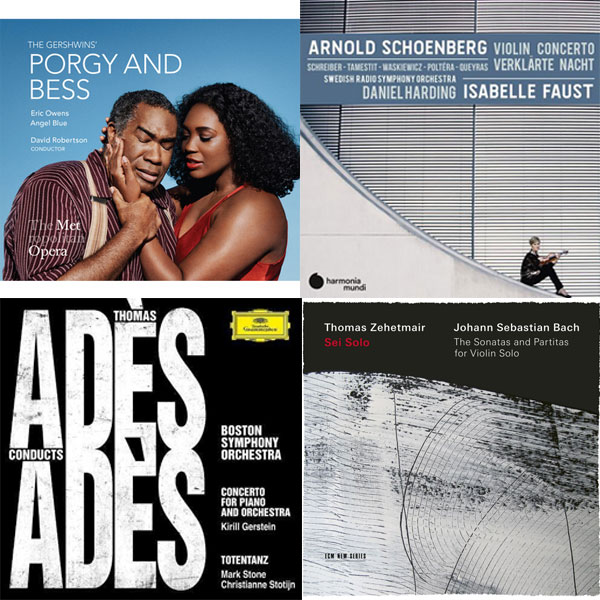 GERSHWIN: PORGY AND BESS (Metropolitan Opera, 3 CDs, $29.98) – To open its 2019-2020 season, the Metropolitan Opera staged a new production of Porgy and Bess, starring Eric Owens and Angel Blue in the title roles. Other stars included Golda Schultz (Clara), Latonia Moore (Serena), Denyce Graves (Maria), Frederick Ballentine (Sportin’ Life), and Alfred Walker (Crown). Porgy and Bess, first produced in 1935, was composed by George Gershwin, with the libretto and lyrics by Ira Gershwin and DuBose Heyward (based on his book, Porgy, and its theatrical adaptation by DuBose and his wife, Dorothy). This production won raves, and extra performances were added during February, and was also broadcast on the Met’s weekly Saturday showcase, and its HD video broadcasts in theatres. The album package includes a 20-page booklet

NOTE: Isabelle Faust will be featured with the Freiburg Baroque Orchestra at the Library of Congress on Friday, July 24.

THOMAS ADÈS CONDUCTS ADÈS (Deutsche Grammophon, $19.98) – Thomas Adès is a busy composer of chamber music and operas, a conductor, and a pianist (he accompanies Ian Bostridge on his latest recording of Winterreise). His new album includes world premier recordings, with the composer himself conducting the Boston Symphony Orchestra. Kirill Gerstein is the featured artist in the Concert for Piano and Orchestra (2018), and mezzo-soprano Christianne Stotijn and baritone Mark Stone are featured in the Totentanz (2013).

BACH: Sonatas and Partitas for Violin Solo (ECM, 2 CDs, $29.98) – Thomas Zehetmair first recorded the iconic Sei Solo of Bach in 1982. He revisits the Sonatas and Partitas, now playing on two Baroque violins with a Baroque bow. This album came out late in 2019, and gained instant accolades, among them a place on the New York Times Best Classical list.