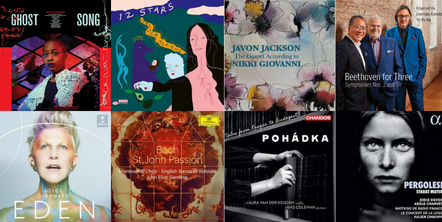 Cécile McLorin Salvant, GHOST SONGS (Nonesuch, $16.98) –  After four wonderful albums on the Mack Avenue label, the album I’m most excited about this spring is the Nonesuch debut of my favorite jazz singer, Cécile McLorin Salvant. Ms. Salvant has always programmed her albums creatively, and she’s been writing even more original songs (not to mention her evening-length work, Ogresse).

Ghost Song opens and ends with sean-nós (a traditional Irish unaccompanied vocal style), with her new songs predominating. As she says, “All the songs on the album kind of mirror each other. I tried to create this strange symmetry. So as you go in from both ends, the songs are sort of matched together.”Ms. Salvant also weaves in covers of “Wuthering Heights” (Kate Bush), “Until” (Sting), “The World is Mean” (Brecht/Weil/Blitzstein), and a medley of “Optimistic Voices (from The Wizard of Oz) with Gregory Porter’s “No Love Dying.”

Nonesuch has sent P&P some limited-edition signed prints to give away to anyone purchasing Ghost Songs.

Javon Jackson, THE GOSPEL ACCORDING TO NIKKI GIOVANNI (Solid Jackson, $18.98) – After lecturing for Javon Jackson’s students at University of Hartford, poet Nikki Giovanni heard Steal Away, gospel songs played by Hank Jones and Charlie Haden.  Saxophonist Javon Jackson reached out to poet to select her favorite spirituals, hymns, and gospel tunes, and this new album is the result.

Mr. Jackson and his quartet (pianist Jeremy Manasia, bassist David Williams, and drummer McClenty Hunter play such iconic numbers as “Didn’t My Lord Deliver Daniel,” “Leaning on the Everlasting Arms,” “I Opened My Mouth to the Lord,” and “Swing Low, Sweet Chariot.”

Ms. Giovanni also sings her “Night Song,” in tribute to Nina Simone, who covered the song in 1964.

Joyce Di Donato, EDEN (Erato, $18.98) – A wide ranging recital by the mezzo-soprano about nature, a “musical exploration through the centuries to remember and to create a new Eden from within.” The program, with Il Pomo d’Oro, includes Ives, Mahler, Gluck, Wagner, Handel, Copland, Marini, and Rachel Portman.

NOTE: On Sunday, April 24, Joyce Di Donato and Il Pomo d’Oro will perform a program based on Eden at Strathmore.

BACH: ST. JOHN PASSION (Deutsche Grammophon, 2 CD/1 Blu-Ray, $22.98) – Recorded on Good Friday, 2021, at Sheldonian Theatre, University of Oxford, John Eliot Gardiner conducted the English Baroque Soloists and the Monteverdi Choir.). This is Gardiner’s third recording of the work (the first was in 1986), and, as he states, this work “remains truly special to me. Bach conceived the piece as much as an act of worship as a work of religious art. Almost 300 years after it was heard for the first time, it continues to move listeners of all faiths and none.”

The album is completed by Haydn’s Symphony No. 49 in F Minor ‘La Passione.”