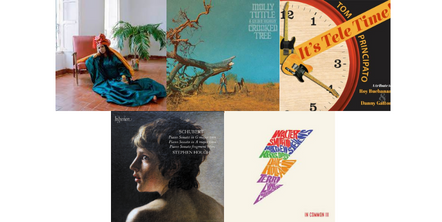 SCHUBERT: PIANO SONATAS (Hyperion, $19.98) – Stephen Hough returns to Schubert, juxtaposing the “expansive terrain”  of the late Piano Sonata in G Major, D 894 (1826), and the earlier Piano Sonata in A Major, D 664. In between is the short fragment of Sonata in E minor, D769a, which was never finished.

Tom Principato, IT’S TELE TIME! A Tribute to Roy Buchanan and Danny Gatton (Powerhouse, $17.99) – As Tom Principato notes, “I have always thought of myself in my own way, as being part of the ‘Washington D.C. Telecaster tradition’.”

Roy Buchanan and Danny Gatton…were my heroes, and through them I heard the playing of my other heroes like Les Paul, Chet Atkins, Roy Nichols, Charlie Christian and James Burton.

This is a collection of live recordings showing those influences…There would be a part of the show where I would strap on a Telecaster, joke about ‘it’s Tele time!’ and ‘unleashing the chickens,’ and for a part of the night everything that I learned or absorbed from Roy and Danny would come pouring out.”

In this iteration, the two are joined by pianist Kris Davis, and the dynamic rhythm section of masters Dave Holland on bass and Terri Lynne Carrington on drums