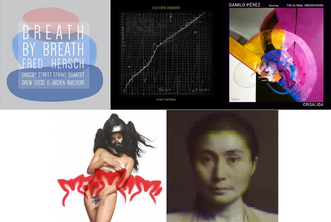 As Hersch states in his liner notes: “String quartets have been some of my favorite music to listen to my whole life...I grew up listening to string quartets as a very young musician in Cincinnati. My piano teacher was the wife of the cellist in the famous LaSalle Quartet. I used to lie on the rug in their living room as an elementary school student while they rehearsed, quietly following along, hearing how the viola part meshed with the first violin, or the second violin and the cello. And ever since I started studying composition at age eight, almost all of my music has always focused on four melodic parts — so string quartets are a natural musical configuration for me.”

Brad Mehldau, JACOB’S LADDER (Nonesuch, $15.98) – A new album of originals as well as interpolations and covers of the prog-rock classics. These are the groups—Rush, Gentle Giant, Yes—that Mehldau listened to as a pre-teen, which served as his gateway to fusion, then jazz. Helping Mehldau (who plays multiple keyboards) are colleagues such as saxophonist Joel Frahm, vocalists Cécile McLorin Salvant and Becca Stevens, mandolinist/vocalist Chris Thile, and drummer Mark Giuliana.

Danilo Pérez featuring the Global Messengers, CRISÁLIDA (Mack Avenue, $18.98) –Pianist Danilo Pérez is a bandleader, a member of Wayne Shorter’s Quartet, a Berklee College of Music teacher, and a goodwill ambassador for UNICEF and UNESCO. He convenes his Global Messengers—former international Berklee—in a new suite of songs.

NOTE: On Saturday, April 30, Danilo Pérez and the Global Messengers are performing at 6th and I Synagogue