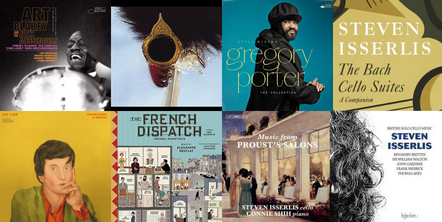 John Zorn, NEW MASADA QUARTET (Tzadik, $19.98) – Composer, alto saxophonist, and bandleader John Zorn’s quartet, Masada, released its first album in 1994 on the Japanese DIW label, then later on his own label, Tzadik. The original group featured Zorn on alto, Dave Douglas on trumpet, Greg Cohen on bass, and Joey Barron on drums, playing all Zorn compositions from his “Masada Songbook.” This first group was together for around 15 years, and there have been other iterations through the years, like Electric Masada. New Masada Quartet features Zorn, Julian Lage on electric guitar, Jorge Roeder on bass, and Kenny Wollesen on drums.

Cellist Steven Isserlis has a new book out, THE BACH CELLO SUITES: A Companion (Faber & Faber, $17.95), intended, as he writes, “for music-lovers of all shapes and sizes, ranging from the casual listener to the performing musician. For Mr. Isserlis, whose recording of the Suites won Gramophone’s Best Instrumental Award in 2007, each of the suites has its own “sound world and emotional world.”  passes along insights galore, along with a short biography, FAQ’s, the history of dance suites, “rules for players,” and a movement-by-movement analysis. There is also the intriguing chapter, “Could There Perhaps Be a Story…Behind the Suites?”

MUSIC FROM PROUST’S SALONS and BRITISH SOLO CELLO MUSIC (both on the Hyperion label, $19.98).