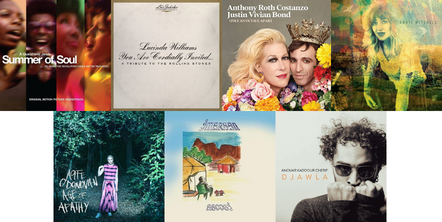 SUMMER OF SOUL: Soundtrack (Sony Legacy, $15.98) – One of the musical and cinematic highlights of 2021 was Questlove’s documentary, Summer of Soul (…or, When the Revolution Could Not Be Televised). Questlove selected riveting performances from unearthed footage of the 6-weekend Harlem Cultural Festival from 1969 (“Black Woodstock”). He edited the footage with new interviews of some of the participating musicians, audience members, and observers.

Lucinda Williams, YOU ARE CORDIALLY INVITED: A Tribute to the Rolling Stones (Highway 20, $14.98) – This is Vol. 6 (the final volume) of Lu’s Jukebox, live in-studio recordings of cover songs that Lucinda did in 2020 to raise money for musicians.

Lucinda picked some of the best Stones songs to cover, and her bluesy voice bring out a whole new dimension to them. “Street Fighting Man,” “The Last Time,” “Paint It Black,” “Salt of the Earth,” “Moonlight Mile,” “Play with Fire,” and “Sympathy for the Devil,” are among the hits.

Anthony Roth Costanzo & Justin Vivian Bond, ONLY AN OCTAVE APART (Decca Gold, $14.98) –  Only an Octave Apart— where opera meets cabaret—has been a hit on stage (excerpts are being performed this weekend at Lincoln Center), and now the recording arrives. The ethereal voice of countertenor Anthony Roth Costanzo (most famous for his title role in Akhnaten at the Met) and the smoky, vibrato-filled voice Justin Vivian Bond (hilarious as Kiki in the long-running act, Kiki and Herb) combined in a fun, campy, yet emotional evening. The arrangements are by composer Nico Muhly, and the medleys are highpoints including “Walk Like an Egyptian/Hymn to the Sun,”  “Dido’s Lament/White Flag,” and “I’m Always Chasing Rainbows/Rainbow Sleeve” Medley.

NOTE: Anthony Roth Costanza is scheduled to give a recital at the Phillips Collection on Sunday, March 20.

Anaïs Mitchell, ANAÏS MITCHELL (BMG, $14.98) – Anaïs Mitchell is the Tony-Award-winning creator of the Broadway (and touring) hit, Hadestown. Since its success, she has collaborated on a collective folk project called Bonny Light Horseman (2020), and now has released her first solo album in many years, with some of her most personal songs. Ms. Mitchell is profiled in this Sunday’s New York Times.

NOTE: Anaïs Mitchell, and her group, Bonny Light Horseman, is scheduled to perform at Strathmore on February 11.

Aoife O’Donovan, AGE OF APATHY (Yep Roc, $16.99) – Aoife O’Donovan comes from a musical Irish-American family, and has been a member of Crooked Still, formed a super-trio with Sarah Jarosz and Sara Watkins (I’m With Her), collaborated on Yo-Yo Ma and Chris Thile’s Goat Rodeo Project, not to mention several solo albums, and a pandemic project where she covered the entirety of Springsteen’s Nebraska.

Read Aoife’s thoughts on the making of Age of Apathy in a New York Times profile last week.

Imarhan, ABOOGI (City Slang, $14.99) – The guitar-driven Tuareg “desert blues” (assouf) came to prominence with the group Tinariwen, and Imarhan continue and update that tradition. Building a studio in Tamanrasset, in southern Algeria, Imarhan “become the spokesmen of the young Tuareg ‘lost generation’ (forgotten by Algerian, Nigerian and Malian governments).”