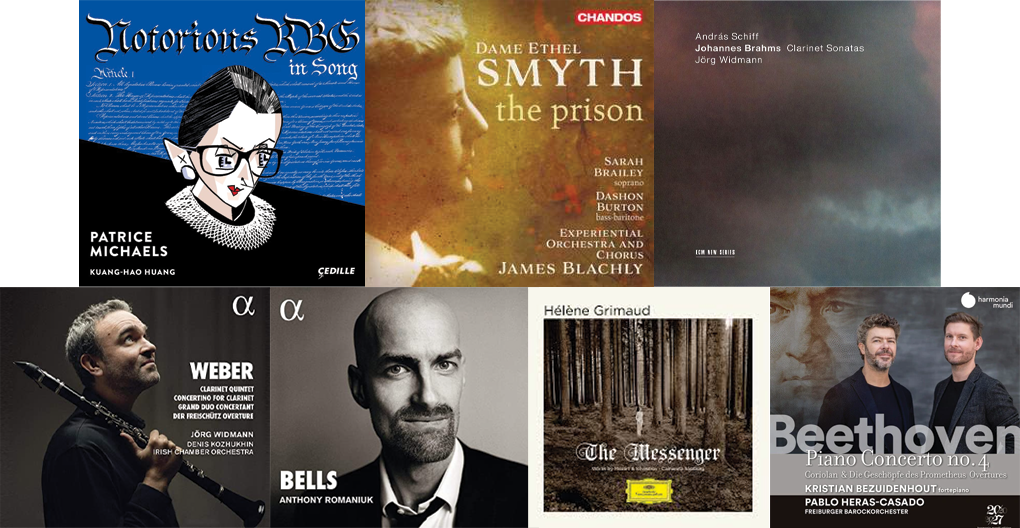 In 1999, Justice Ruth Bader Ginsburg’s son, James Ginsburg, founded the classical music label, Cedille Records, based in Chicago.  Two years ago, he released NOTORIOUS RBG IN SONG (Cedille Records, $17.99), a project that began as three song commissions by James and his sister, Jane, for their mother’s 80th birthday.  I will quote extensively from his introductory notes:

“Not only is the subject of the album my mother, but the featured performer and composer of the main work is my wife, Patrice Michaels. I love how her cycle, The Long View, portrays different members of my mother’s family—including her mother, my father, his father, my sister, and me—before moving on to the final two songs about Mom’s life and work on the Supreme Court. Particularly close to me are the songs that illustrate my grandfather’s amazing wisdom (the advice he gives Ruth as a young mother-to-be in the mid-1950s is truly remarkable), my late father’s jovial nature as Mom’s biggest booster and, of course, the one immortalizing my own youthful hijinks, in which Mom wins a point for equal rights…

Vivian Fung’s Pot Roast à la RBG brings to life the hilarious pot roast ‘recipe” my sister created as a 50th birthday tribute to Mom in 1982. (All of the culinary mishaps alluded to in the song are real!)

I was with my mother when she discovered her husband’s farewell love letter in his hospital room. Stacy Garrop’s setting, My Dearest Ruth, could not be more moving. Lori Laitman’s Wider than the Sky—originally written for her mother-in-law’s 75th birthday—was also performed at Mom’s 80th birthday celebration and absolutely captures her essence.”

Patrice Michaels is accompanied by the pianist Kuang-Hao Huang.

Ethel Smyth, THE PRISON (Chandos, $19.99) – The world-premiere recording of the 1930 choral symphony by English composer Ethel Smyth (1858 – 1944). The Prison “exerts a metaphysical gravity…Smyth’s music calls to mind Brahms, Elgar, and even Mahler at their visionary and searching.” (Steve Smith, the New Yorker). The vocal soloists are Sarah Brailey and Dashon Burton; James Blachly conducts the Experiential Orchestra and Chorus.

Hélène Grimaud, THE MESSENGER: Mozart and Silvestrov (Deutsche Grammophon, $13.98) – Ms. Grimaud plays three Mozart works: the unfinished Fantasia in D minor K 397, the Piano Concerto in D minor K 466 and the Fantasia in C minor K 475. She juxtaposes works by Valentin Silvestrov: The Messenger-1996 (dedicated to his late wife) and Two Dialogues with Postscript. She is accompanied by Camerata Salzburg.

To order any CDs, sign up for the CD/Book of the Month, or for other music suggestions, email me directly: agoldinger@politics-prose.com