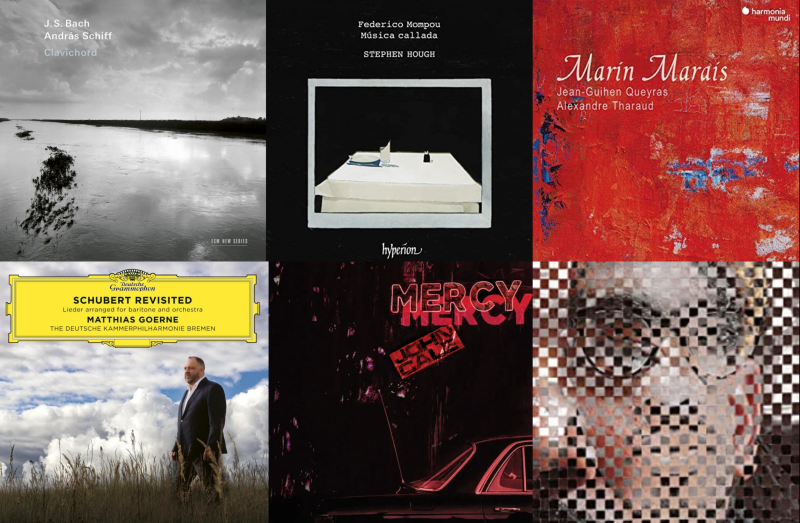 J.S. BACH: CLAVICHORD (ECM, 2 CDs, $30.98) – András Schiff has explored Bach’s music with commitment and depth for decades on the piano. Now, he takes us into Bach’s sound-world from a new perspective, by playing a new instrument: “On the clavichord we have only our fingers at our disposal, they must create the music with the finest gradations of touch…a new world, a quiet oasis in our noisy, troubled times. Thanks to the clavichord, I now play and hear Bach differently.”

Schiff focuses on early keyboard works: the 2-CD album opens with the Capriccio sopra la lontananza del fratro dilettissmo, journeys through Inventions and Sinfonias, and concludes with an account of the Chromatic Fantasia and Fugue. Mr. Schiff plays a replica of a 1743 Specken instrument, built by Belgian craftsman Joris Potvlieghe.

From Philip Clark’s booklet notes: “The elegant touch and harmonic suspensions of Art Tatum and Teddy Wilson, Dave Brubeck’s feeding off Darius Milhaud, and Bill Evans’s fascination with Ravel and Debussy all feel part of Mompou’s palette…This is music, too, that has something of the pared-down, crystalline textures of Morton Feldman’s solo piano music..The music doesn’t act upon you. Instead it forces listeners into a contemplation of their own relationship with the sounds, of how sound can impinge upon their own solitude.”

NOTE: Stephen Hough will give a recital at the Library of Congress on Tuesday, March 21.

James Brandon Lewis, EYE OF I (Anti, $14.98) – Tenor saxophonist James Brandon Lewis has a powerful sound, and his last album, The Jessup Wagon, was one of the highlights of 2021. Now he unleashes his tenor on a set of new tunes, with a trio feauring Chris Hoffman on cello and Max Jaffe on drums. The final cut,“Fear Not,” features a collaboration with DC’s own Messthetics (Anthony Pirog, guitar, Joe Lally, bass, Brendan Canty, drums).

NOTE: James Brandon Lewis and the Messthetics will play the Black Cat on Saturday, March 18.