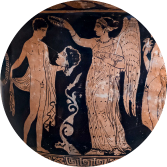 Greek tragedy is remarkable for its dramatization of strong and dangerous women who murder their husbands—or even destroy their children—and are themselves destroyed before our eyes. Such cycles of violence and revenge understood by the ancient Athenians as fundamental to the human condition. We study how the ancient playwrights Aeschylus, Sophocles, and Euripides each staged a confrontation within the household, a fatal clash that drew on mythic and cultural stereotypes that held a fascination for the ancient audience. Do these stereotypes still resonate with us today?

To understand the sources of power for the tragic wife, we also study how figures such as Clytemnestra or Medea deploy the ordinary-seeming tools of their everyday lives—the loom & the pharmaka or medicine chest – to assume control within their household and corrupt it for their purposes. We visualize characters’ interactions and movements on stage as representation of such power, how it is gained or lost. And finally, we reflect on the figure of the child who can become a weapon in the struggle to wrest control away from the male head of household whose position seemed so unassailable.

October 25: read Sophocles’ Women of Trachis, vv 1-946 as well as the introduction to this play.

Victoria Pedrick, an associate professor of Classics at Georgetown University, has published essays on Homer, Greek Tragedy, and Latin Lyric as well as two volumes on tragedy, one a collection of essays and the other a study of Euripides and Freud. She teaches courses in Greek language and literature, with a particular interest in Archaic and Classical Greek literature and culture and for many years taught Introduction to Classical Myth. In all her courses, she encourages students to focus on the audience and cultural contexts for ancient texts, including when appropriate modern engagement. She served as the Associate Dean of Academic Affairs at the Georgetown University School of Foreign Service in Qatar and is finishing her term as the faculty chair of the Georgetown Honor Council.