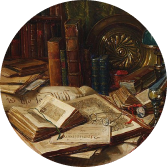 Begun in 1917 and left unfinished at his death in 1973, J.R.R. Tolkien's "mythology for England" evolved over the intervening years into the epic story of a vast, beguiling but imperfect world, how it began and what become of it. He called it the "Silmarillion." In 1977 Tolkien's son and literary heir Christopher Tolkien published a one-volume condensation—under the title The Silmarillion—that included the major episodes and traced the arc of Tolkien's vision. We'll read The Silmarillion in the context of the "Silmarillion" to track its evolution from start to not-quite-finish.

Verlyn Flieger is Professor Emerita in the Department of English at the University of Maryland at College Park where she taught courses in Tolkien, Medieval Literature and Comparative Mythology. She is the author of five critical books on the works of J.R.R. Tolkien: Splintered Light, A Question of Time, Interrupted Music, the essay collections Green Suns and Faërie and There Would Always Be A Fairy Tale. She edited the Extended Edition of Tolkien's short story Smith of Wootton Major. With Carl Hostetter she edited Tolkien's Legendarium: Essays on The History of Middle-earth, and with Douglas A. Anderson she edited the Expanded Edition of Tolkien On Fairy-stories. With Michael Drout and David Bratman she is co-editor of the yearly Journal Tolkien Studies. She has published two fantasy novels, Pig Tale and The Inn at Corbies' Caww, and an Arthurian diptych, Arthurian Voices: Avilion and The Bargain.

The Book of Lost Tales: Part One (The Histories of Middle-earth #1) (Mass Market)