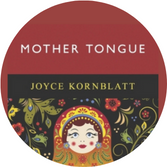 Join the conversation between former D.C. resident Joyce Kornblatt (author of, among other novels, The Reason for Wings) and Evelyn (“Evi”) Torton Beck, Professor Emerita of Women’s Studies as they explore the layers of this complex novel.

"Kornblatt imbues her narrator’s pursuit of self-identity with carefully measured prose: 'I came upon the facts of my existence as one who returns to her home in the midst of a burglary: here is the shattered glass, the rifled drawers, the thief with the booty still cradled in her guilty arms.' This author’s worthy return is full of grace and substance." (Publishers Weekly)

Mother Tongue is a unique mother-daughter story that spans the world from Australia back to the United States from where the child Nella, who is at the center of this novel, was born and from where she was stolen by her abductor/mother, a fact which remains a secret until after her death. Writing becomes a process of repair for Nella. ”I came upon the facts of my existence as one who returns to her home in the midst of a burglary: here is the shattered glass, the rifled drawers, the thief with the booty still cradled in her guilty arms.”

Joyce Kornblatt lives and writes in the Blue Mountains. An American-born novelist who moved to Australia in 2003, she is the author of four well-reviewed novels: Nothing to Do with Love, Breaking Bread, White Water, and The Reason for Wings–which have been published in the U.S., England, France, Denmark, and Germany. Her short stories, essays, and book reviews have appeared in publications such as The Atlantic Monthly, The New York Times, The Washington Post, Georgia Review, Iowa Review, and The Sydney Morning Herald. For twenty years, she was a Professor of Literature and Creative Writing at the University of Maryland in the U.S. In Australia she has taught and supervised post-graduate writing students, been a tutor at Varuna Writers House, and mentored a number of award-winning Australian writers. For many years, she has offered writing retreats and year-long private workshops in Sydney.

Evelyn Torton Beck holds PHDs in both Comparative Literature and Clinical Psychology. She is Women’s Studies Professor Emerita at the University of Maryland and an Alum Research Fellow with the Creative Longevity and Wisdom Initiative at the Fielding Graduate University. She has pioneered numerous interdisciplinary courses on topics as diverse as Women in the Arts, Mothers and Daughters, Jewish Women in International Perspective, Women and the Holocaust, Death and Dying in Modern Literature, Lesbian Studies, Gender, Power and the Spectrum of Difference, and Feminist Perspectives on Psychology, among others. She has also written and lectured widely on the intersections of sexism, racism, anti-semitism, and homophobia. For her life’s work in interdisciplinary fields she was awarded an Honorary Doctorate from the University of Music and Performing Arts in Vienna, Austria this September; the ceremony was postponed by a year because of Covid.