ONLINE CLASS: A Literary Voice from Syria via Germany, the Literature of Rafik Schami (2206) 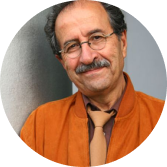 Here is another series of classes under the main heading of attempting to understand the Middle East and North Africa (MENA) through literature and prose written by its authors, advocates, observers and supporters. This time we will read books by the Syrian-German novelist Rafik Schami who is described by the Goethe Institute as: “Rafik Schami is one of the most important writers of the German language. He came to Germany when he was twenty-five years-old; his homeland Syria he carries in his heart. It is the focus of many of his stories.” Through three novels we will travel to Syria and read about a passionate love story of a Muslim woman and a Christian man and learn about the art of Arabic calligraphy in Syria. Next, we will travel to Damascus in 1959 and read about the most famous storyteller of the time and with Schami’s marvelous prose and vision of storytelling as “food for thought and salve for the soul, as the glue which holds our lives together.” Our final novel to read and discuss in this series of classes is Sophia or the Beginning of All Tales. The novel is about “A murder in Damascus, a love with the power to save a young man’s life. In his latest novel, Rafik Schami ventures to the land of his childhood, where he is now unable to safely return: Syria.” So, join me on this tumultuous, passionate, and heart rendering voyage back to Syria for this most interesting Syrian-German author. Schami is described by the Goethe Institute as a “‘friend from Damascus’, which is the meaning of his pen name ‘Rafik Schami’”.

“Even as a young man, Hamid Farsi is acclaimed as a master of the art of calligraphy. But as time goes by, he sees that weaknesses in the Arabic language and its script limit its uses in the modern world. In a secret society, he works out schemes for radical reform, never guessing what risks he is running. His beautiful wife, Nura, is ignorant of her husband's ambitions, knowing only his cold, avaricious side. So it's no wonder she feels flattered by the attentions of his young apprentice. And so begins a passionate love story--the love of a Muslim woman and a Christian man.” https://www.goodreads.com/book/show/8698483-the-calligrapher-s-secret?from_search=true&from_srp=true&qid=2ZYrH5BNs1&rank=1

“It is 1959, Damascus. The most famous storyteller in Damascus, Salim, the coachman, has mysteriously lost his voice. For seven nights, his seven old friends gather to break the spell with their seven different, unique stories -- some personal, some modern, some borrowed from the past. Against the backdrop of shifting Middle Eastern politics, Schami's eight characters, lost to the Arabian nights, weave in and out of tales of wizards and princesses, of New York skyscrapers and America. With spellbinding power, Schami imparts a luscious vision of storytelling as food for thought and salve for the soul, as the glue which holds our lives together.” https://www.goodreads.com/book/show/507036.Damascus_Nights?from_search=true&from_srp=true&qid=rwObuqINb8&rank=1

“A masterpiece from the best-selling author of The Dark Side of Love. A murder in Damascus, a love with the power to save a young man’s life. In his latest novel, Rafik Schami ventures to the land of his childhood, where he is now unable to safely return: Syria. As a young girl, Sophia falls deeply in love with Karim, but weds a rich goldsmith instead. A few years later, Karim is accused of an assassination he did not commit, and Sophia saves his life. He promises that she will forever have his loyalty, no matter the risk to himself. Long after the incident is buried in memory, Sophia's only son, Salman, returns to Damascus after forty years of exile in Italy; when his photo appears in the newspaper, he is forced into hiding and fears for his life. Remembering Karim’s promise, Sophia decides to call on him for help in spite of the many years that have passed, and the lost opportunity of their once-consuming passion Set during the tumultuous years leading up to the Arab Spring, Sophia delivers the intricate plotting and lyrical prose that Schami’s readers expect, and reveals the power of love to overcome all barriers of time and circumstance.” https://www.goodreads.com/book/show/35468276-sophia?ac=1&from_search=true&qid=D5bgL4ZzZT&rank=1

Heba F. El-Shazli is an Egyptian-American and an avid lover and reader of literature from the Middle East and North Africa (MENA) region. She is an assistant professor of political science at George Mason University’s Schar School of Policy and Government and an adjunct professor at Georgetown University’s Master’s Degree Program at the Center for Democracy and Civil Society. Heba teaches courses on governments and politics of the Middle East and North Africa, Islam and politics, international relations, and the role of civil society and social movements in democratization. She has a Ph.D. in Planning, Governance, and Globalization (PGG) with a specialization in Governance and International Affairs from Virginia Tech’s School of Public and International Affairs and a Master’s degree from Georgetown University. She was the Director of MENA programs at the Solidarity Center (2004-2011) and the Deputy MENA Regional Director at the National Democratic Institute for International Affairs (NDI) from 2001 until 2004. She is a member of the Council on Foreign Relations (www.cfr.org).

Sophia: or The Beginning of All Tales (Paperback)