ONLINE CLASS: France Under Occupation, in Fiction and Nonfiction (2201) 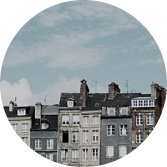 The shadow of World War II still hangs very heavy over hearts and minds in France. In this class we will discuss four books set during the years of the Nazi Occupation. Three of them are works of historical fiction, and one is nonfiction. We’ll start with Anthony Doerr’s Pulitzer Prize-winning novel, All the Light We Cannot See, a story of the convergence of two lives—one of a French girl, the other of a young German soldier—during the destruction of St. Malo toward the end of the war. Next we’ll discuss Janet Skeslien Charles’s The Paris Library, the story of a friendship between an elderly Frenchwoman and an adolescent American girl. Set in Paris in the period immediately before and during the Occupation, and in Montana in the 1980s, much of this story is based on real activities that were carried out by the staff of the American Library in Paris during the war. Our next book, Every Time We Say Goodbye, is a fictionalized version of a true story from the author’s family, about her uncle, a talented young writer who became a committed fighter in the French Resistance. This story takes us into wartime Germany, Belgium, Morocco, and Spain, as well as various parts of France; and is a testimony to the long-lasting, intergenerational wounds of war. We’ll end with Women of Valor, the inspiring true story of the Rochambelles, the first female unit to be attached to an armored division in the western front during World War II (the French 2nd Armored), as they make their way from New York, join up with General Leclerc in North Africa, and then move on to England, Normandy, Paris, Alsace—and on into Germany as the Allies finally succeed in liberating France from four years of brutal occupation. In addition to the history we’ll learn along the way, we’ll see how storytelling, whether in fiction or nonfiction, can bring to life the drama inherent in the most challenging of human experiences—and remind us that although war brings out the worst in some people, it also brings out the best in others. Visits by the authors of some of the books will enrich our discussions.

Jan 14: Intro to class and begin discussing  Doerr’s All the Light We Cannot See. Assignment: Read through to the end of Chapter 4.

Jan 21: Finish discussing Doerr’s All the Light We Cannot See

Feb 18: Discuss Payne's Every Time We Say Goodbye: A Novel

Janet Hulstrand is a writer, editor, writing coach, and teacher who lives in Essoyes, a beautiful village in southern Champagne, on the border of Burgundy. She writes frequently for Bonjour Paris, France Today, and France Revisited, as well as for her blog, Writing from the Heart, Reading for the Road. She is the author of Demystifying the French: How to Love Them, and Make Them Love You, and is currently working on her memoir, A Long Way from Iowa. She has taught Paris: A Literary Adventure for the City University of New York since 1997, and literature and culture classes at Politics & Prose since 2011. Janet's 'insider' perspective, developed over more than 40 years of living, working, traveling, and teaching in France, as well as her perspective as a writer/editor, will lend depth and interest to our discussions.

All the Light We Cannot See: A Novel (Paperback)

The Paris Library: A Novel (Hardcover)

Every Time We Say Goodbye by Reneé-Michèle Payne