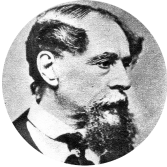 “That was a memorable day to me, for it made great changes in me. But it is the same with any life. Imagine one selected day struck out of it, and think how different its course would have been.”― Charles Dickens

Great Expectations (1860-1861)  overlapped with a work of nonfiction called The Uncommercial Traveller.  Donning a shadowy persona, Dickens rambled through mid-century London while reflecting on his childhood haunts in Chatham. He recalled the grotesques of his old “Nurse’s stories” and drifted back to the first world of “Chatham Dockyard;” in “Travelling Abroad,” Dickens even met and interviewed a 9-year-old version of himself who pointed to a grand house on a hill where his father said he might live someday, if he worked with industry. This was Gad’s Hill, Rochester, where Dickens settled and turned a new leaf, playing the country gentleman after separating from his wife and leaving the city behind.

Summoning the ghosts of memory, Dickens placed the young Pip in the marshes of Kent in the famous opening pages of the novel. This piece of unforgiving wetland is soon populated by convicts and blacksmiths, mean older sisters and an even meaner patroness in a yellowed wedding dress, silly Shakespearean school teachers, thick-headed bullies, a legal titan and a frosty young lady with a heart of ice. Under the spell of unrequited love, Pip leaves the coarseness of the forge to cultivate the soft hands suited to an heir of fortune. As he strives to fulfill his great expectations, Pip encounters 180 characters in all, a parade of friends and foes alongside figures who show utter indifference to his fate.

A lyrical overlay of experience atop of innocence, and a weave of imagination with autobiography, Great Expectations traces the delightful and painful misapprehensions of youth when corrected and sharpened by the hard knocks of life and revelations of maturity. Travel into the mists of time to revisit a classic which has inspired countless readers to become writers themselves— and see for yourself why “Great Expectations” rose to the high-water mark of the Victorian novel to become the household word of a century.

Nicole Miller's prize-winning essays have appeared recently in New Letters and Arts & Letters magazines. Her fiction has been published twice in The Mays, edited by Jill Paton Walsh and Sebastian Faulks. She received an M.Phil. in Victorian Literature from Lincoln College, Oxford; a PhD in English at University College, London; and an MFA at Emerson College, Boston, where she held the Graduate Fellowship in Creative Writing. At The Oxford English Dictionary, she has served as a scholarly reader for British Dialects since 2002. She edits faculty manuscripts in Harvard’s English Department and teaches nineteenth and twentieth century British literature at Politics and Prose in Washington D.C.