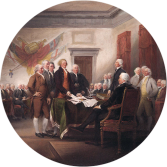 Lecture with Some Discussion:

Seen through American eyes, July 4, 1776 marks a triumphant moment: the birth of a bold new nation committed to life, liberty, and the pursuit of happiness. Through British eyes, the American Revolution looked quite different. This four-part course will examine America through the lens of Britain’s Empire. First, we’ll look at the resulting war from perspective of the Palace, the Parliament, and the British people. Second, we’ll explore the conflict from the vantage of the Irish and their descendants in America. Third, we’ll pivot southward to study the fate of empire on Britain’s Caribbean islands. Finally, we’ll investigate the terms of the 1783 Treaty of Paris, the peace pact that dramatically shrank the boundaries of the British Empire and confirmed the independence of the newly United States.

The Long Goodbye: The American Revolution in Britain

In this first class, we’ll see how British responses to the war were anything but monolithic. The country was bitterly divided as to what the war was about, how to win it, and whether it was worth it.

The Fighting Irish: Ireland in the American Revolution

In this second class, we will explore the Revolution from the perspective of the Irish and their descendants in America and reconstruct the political and economic impact of the American Revolution on Ireland itself.

The Jewel in the Crown: The American Revolution in the Caribbean

In this third class, we will explore how fearful British officials worked to split their empire in half, insulating their hugely profitable Caribbean slave colonies from the contagion of revolution by any means possible.

The Treaty of Paris: America’s Future on the Brink

In this final class we explore how the 1783 Treaty of Paris ending the war confirming US independence, upending the British Empire, and leaving Natives, loyalists, and African Americans to fend for themselves.

Richard Bell is Professor of History at the University of Maryland and author of the new book Stolen: Five Free Boys Kidnapped into Slavery and their Astonishing Odyssey Home which is shortlisted for the George Washington Prize and the Harriet Tubman Prize. He has held major research fellowships at Yale, Cambridge, and the Library of Congress and is the recipient of the National Endowment of the Humanities Public Scholar award and the Andrew Carnegie Fellowship. He serves as a Trustee of the Maryland Center for History and Culture and as a fellow of the Royal Historical Society.