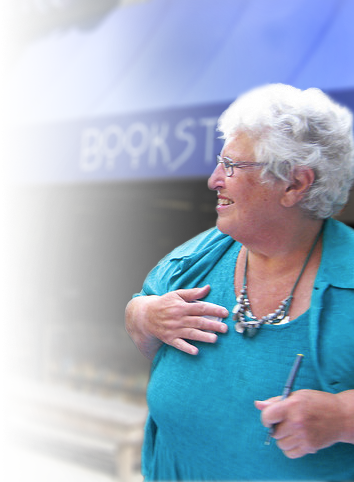 It is with deep sorrow that we wish to inform our friends and neighbors that our beloved store co-owner and founder Carla Cohen died at 8 a.m. on Monday, October 11, 2010. For all of us here at Politics & Prose, it is difficult to believe that someone larger than life is gone, and I will deeply miss my friend and partner.

A funeral was held at Tifereth Israel on Wednesday, October 13. Her family has requested that, if you feel so moved, contributions may be made to Jews United for Justice, the Washington Literacy Council or Community Hospices.

This has been a sad time, and we thank our many friends, customers, and colleagues in the book industry for their thoughtful tributes and condolences written below. Reading through the anecdotes, I am continually reminded how many aspects there were to Carla and about the abundance and variety of her talents. Some of you have asked to see the eulogies presented at the funeral, so we have provided them here through these links:

Please read the obituary from the Washington Post here.

We also welcome and encourage your condolences, tributes, and memories here.

We will hold a memorial tribute in the store on Sunday, November 21 at 1 p.m.


Born in Baltimore April 11, 1936, Carla was the first of the six children of Frank and Edith Furstenberg.

Her family, liberal activists, vigorous advocates of civil rights and civil liberties, leaders in social work and social democracy, invested her with values and passion that formed the bedrock of her life.

She was educated in the public schools of Baltimore and was graduated by Antioch College in 1958.  She married David Cohen of Philadelphia that year (They had met in the student branch of Americans for Democratic Action) and they settled briefly in Philadelphia where she studied for her Masters Degree in City Planning at the University of Pennsylvania.

Naturally attracted to the planning views of Cushing Dolbeare and Elizabeth Montgomery who became her mentors, Cohen joined a wave of democratic planning that was a reaction to the prevailing orientation -- centralized, paternalistic planning whose strongest and best-known advocate was the New York’s Robert Moses.

Cohen worked for the Philadelphia Housing Association, a citizen organization devoted to planning from the bottom up through neighborhood building.  That experienced her co-founding Planners for Equal Opportunity.

In 1963 she and her husband moved to Washington. He became the legislative representative of ADA, she to the Washington Planning and Housing Association.

In 1977, Cohen, then working for Cong. Henry Reuss’ Subcommittee on the City, organized an inquiry into how cities can grow old gracefully.  She then became a special assistant to Robert Embry, Jr., a Baltimorean like her, a pioneer in the uses of local resources to build neighborhoods, who was Assistant Secretary for Housing in the Carter Administration.

Among her proudest achievements of that period was the grant to Miami Beach that she orchestrated; it seeded the revival of South Beach’s Art Deco hotels which at that time were dilapidated rooming houses and her work in advancing the needs of those forced to relocate by urban renewal.

Settled in an imposing grey stone house in the Shepherd Park neighborhood of Washington, Cohen and her husband who was by then the president of Common Cause became counter-fashionable hosts of an “intellectual salon.”  Friends like Mark and Ann Shields, Seymour and Elizabeth Hersh, Father Robert Drinan and many others came to dinner parties and Jewish holiday celebrations to enjoy Cohen’s robust cooking and the household’s conversation about current affairs.

Her governmental career, however, came to an end in 1981 with the election of Ronald Reagan.  Politically in the wilderness, Cohen knew she had to reinvent herself.  She founded “Work-seekers,” an informal group of refugees from Democratic administrations that met regularly at her home to discuss their temporarily stalled careers.

Cohen’s own choice for a new career came organically from her lifelong passion for reading.  It made sense.

As a child, she had been able to escape the inevitable chaos of a robustly noisy Jewish family by burying herself in books.  As a child she sat in her family’s living room never hearing the quarrelsome shouts of her siblings.  (“Car, Car,” they would say, trying to attract her attention, nearly always failing.)

As an adolescent, she read.  As a student, she read.  Books were a constant in her life.  Even while at HUD, she escaped the office at lunch hour to browse in a L’Enfant Plaza bookstore.

Entrepreneurship, however, was not in her background.  Her maternal grandfather, Sidney Hollander, had fled his pharmaceutical company as early as possible to become social activist and Jewish philanthropist.  Her paternal grandfather, Marcus Furstenberg, a Swedish refugee, a watchmaker in Indianapolis, was a socialist scornful of business.

Nearly everyone in her family was in social service.  “Social work is the family business,” they used to say.

Indeed, Cohen’s entire background was anti-business so it was amusing to her family and all who knew her that Cohen decided to start a bookstore.  It was, however, just like the contrarian character she had inherited that she chose a part of retail then being nationalized.  It was a time at which small, independent bookstores were beginning to perish in large numbers.

Politics & Prose opened in 1984, a small storefront on Connecticut Avenue.  It was entirely an invention of Cohen’s passions.  It specialized in current affairs, gave a platform to Washington writers, featured well-known and unknown novelists, and devoted itself to customer service.  It was almost immediately a great success.

In 1989, P&P moved across the street to larger quarters.  During the subsequent 21 years, it expanded bit by bit, taking over the basement of its space, then expanding to the store next door, then doing it again.

Cohen and Barbara Meade, who joined her as the store manager at the start, and a partner in 1985 worked imaginatively to make books and authors known. The partnership was a resounding success: each reinforced the other’s strength to bring about a high quality of shared leadership. The store attracted a devoted staff of book-lovers who came and stayed not because the store paid well (it didn’t, though better than the rest of the industry), but because working in the store, they could express with creative activity their own passion for books and readers.

And so P&P created a membership program to emphasize its community.  It started book lectures that over the years expanded and expanded until during many times of the year, there are two or three a day.  Book groups, lectures, a newsletter, then a email newsletter, discussion groups, blogs -- every avenue explored to create excitement about books.

Although always open to books and ideas, Cohen’s passion for writers and writing was hardly indiscriminate.  Fully empowered by a family sense of righteousness, Cohen sometimes responded to customers in a less-then-politic way:  “Why would you want to read that; it’s dumb,” she would say to a customer asking for a book of which she disapproved.  “You would enjoy this a lot more -- and it’s a far better book.”

(The irony of being a businesswoman was never lost on her.)

Cohen took a special pleasure in discovery -- of books certainly, but of writers as well.  Among the beneficiaries of her taste and intellect was Wallace Stegner who gave her credit for having helped elevate him from regional novelist of the western U.S. to a writer of great national importance.  And when he visited P&P for a book-signing in April 1989, the line to his table went through the bookstore, out the door, and down the sidewalk of Connecticut Avenue.  That sort of thing happened frequently.

Politics & Prose became a must-stop on the book tours of prominent authors.  And then it became a stop to be sought -- and then one badly needed.  And as it became so important to Washington, it became a model in other cities particularly as it flourished when other bookstores closed and e-books entered the market and book readership changed.

Cohen’s colleagues recognize her accomplishments.  She and Meade, her partner, were named booksellers of the year by Publisher’s Weekly in 1999.  In 2010, they were given the Legacy Award of the New Atlantic Independent Booksellers Association. They also got an award from Roundhouse Theater of Washington, D.C, for their outstanding contributions to regional literary and creative communities.

Cohen and her husband are recipients of the Jewish United Justice Fund’s Abraham Joshua Heschel Social Justice Award on October 24, 2010.

The New Atlantic Independent Booksellers Association created the Carla Cohen Free Speech Award, which goes to a children’s book that best exemplifies the ideals of the First Amendment.

Cohen was diagnosed late last year with cholangiocarcinoma, a rare and particularly loathsome form of cancer, that she fought with the support of her family and the guidance of Johns Hopkins cancer care team and Community Hospices.

We welcome and encourage your condolences, tributes, and memories here.