One Year Since the March 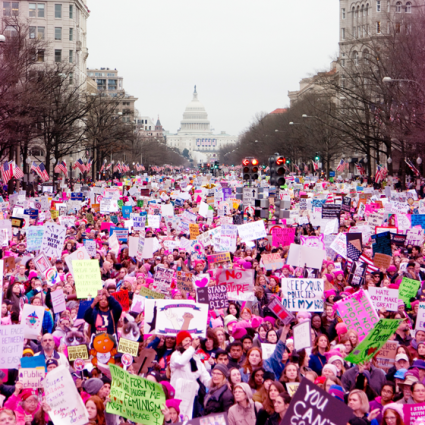 The Women’s March—which took place a year ago on January 21—ignited a passionate crusade on behalf of women’s rights that in the past twelve months has begun to reshape attitudes and gender dynamics across our workplaces, airwaves, and public spheres.

At Politics and Prose, we’re proud to have hosted a teach-in about women’s rights on the eve of the march and have continued to offer programming and books reaffirming women’s rights and highlighting the inequities that remain across a broad spectrum of American life. In 2018, we intend to go on engaging and educating about women’s issues and promoting essential and often challenging conversations about gender and sexism in homes, schools, offices, policy arenas, courthouses, and elsewhere.

Here are some upcoming P&P events that we hope you’ll find of interest:

In celebration of the first anniversary of the Women’s March, come meet Janaye Ingram, a founder and national organizer of the march, on Tuesday, January 23, at 7 p.m. at our flagship store on Connecticut Avenue NW. Janaye will be joined by other special guests for a discussion of Together We Rise, a collection of essays, images, and interviews drawn from some of the key people behind the march. In the book, march organizers relate how the event came about and share personal stories. Also featured are a number of previously unpublished photos. Contributors include such women advocates as America Ferrera, Roxane Gay, Jill Soloway, Ilana Glazer, Ashley Judd, and Janet Mock.

We’re also pleased to bring you the following events at our Wharf location:

Coming up in February we’re excited to host Rose McGowan, whose voice was among the first in Hollywood to speak out about rampant sexism in the entertainment industry. McGowan’s new book, Brave, is part memoir, part polemic, a first-hand testimonial to the unwanted advances and professional injustices that women actresses were (and are) often subjected to in trying to advance their careers. McGowan will be appearing at Jack Morton Auditorium on the campus of George Washington University on February 2 at 7 p.m.

We also are offering classes this year that delve into the often unacknowledged contributions of American women in public life. “A Is for Abigail or Anonymous,” taught by women’s historian and educator, Elisabeth Griffith, begins February 22. The class will cover the challenges of writing about women’s lives when so many stories have been lost to history. Griffith also is scheduled to teach “Women in the 1920s: Flappers and Feminists,” starting March 17, on how women’s lives changed, often in surprising ways, following the passage of voting rights for women.

Our Women’s Biography book club, which meets the second Monday of each month, will next convene on February 12 for a discussion of Susan Quinn’s Eleanor and Hick, an examination of the relationship of Eleanor Roosevelt and reporter Lorena Hickok.

We hope you’ll be part of an ongoing conversation about women and their roles, rights, and opportunities in our country and around the globe.