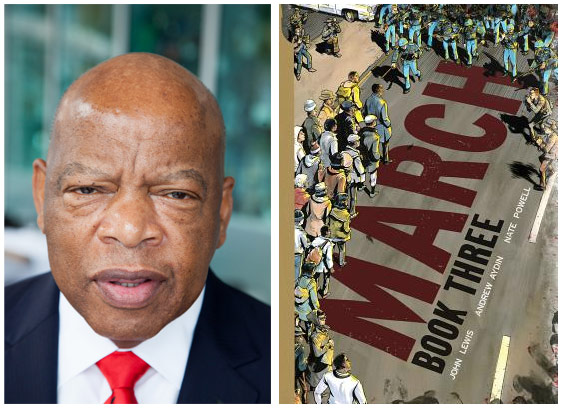 John Lewis, the civil rights leader and celebrated Democratic congressman from Georgia, has never forgotten a comic book about Dr. Martin Luther King, Jr. that he read as a youth. The 16-page graphic story, titled “Martin Luther King and the Montgomery Story” and published in 1957 when Lewis was 17, championed the idea of nonviolent resistance.

A half-century later, Lewis happened to remark to one of his senior congressional aides that the comic book had greatly influenced him and the civil rights movement. The aide, Andrew Aydin, who was Lewis’s policy advisor, had written his master’s thesis on the book. He urged Lewis to tell his own story as a graphic novel, and eventually the congressman agreed.

Early this month, the third and final volume of Lewis’s civil rights graphic memoir, March, was released, receiving much the same praise from reviewers as the first two installments. In all, Lewis, his co-author Aydin, and illustrator Nate Powell have produced nearly 600 pages capturing Lewis’s extraordinary rise as a civil rights activist, from his childhood on a sharecropper’s farm to the sit-ins and Freedom Rides, the 1963 march on Washington, voter registration drives, community action programs, and most famously, the 1965 march where hundreds of demonstrators in Selma were beaten by state police.

Writing in the Washington Post recently, Michael Cavna, the paper’s graphic novel reviewer and creator of the “Comic Riffs” column, praised both the unflinching narrative and the virtuosic art of the trilogy, saying the work “rattles you viscerally even as it propels you visually.” A number of schools and universities around the country have started teaching the books to instruct younger generations in the civil rights movement and to serve as a lesson in nonviolent civil disobedience.

Politics & Prose has been an enthusiastic fan of this project since the first volume was published in 2013. Lewis visited the store then, speaking to a standing-room-only audience. For a video of that appearance, click here.

When the second volume was released, P&P hosted Lewis for another packed house in February 2015 at Busboys and Poets. And we’ve welcomed his repeated visits to the store to sign additional copies of the March books, since we can’t seem to keep them on the shelves for long.

Lewis, of course, continues to speak out as one of the nation’s most visible proponents of social justice and progressive politics. In June, he led a Democratic sit-in on the floor of the House of Representatives, demanding a vote on gun control. And he has been vocal about the Black Lives Matter movement, urging that protests remain peaceful to achieve justice.

The congressman, who at 76 still inspires Americans of all ages and backgrounds, is scheduled to speak and sign copies of March at the National Book Festival on September 24. P&P will be the festival’s official bookseller, and we hope to see you there.