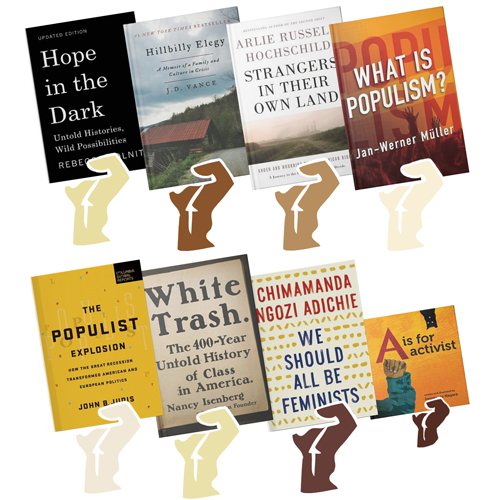 In the days following the presidential election, we’ve been heartened that so many friends of the store have found a refuge at Politics and Prose. We’re determined to continue to inform, comfort, and inspire through books and programs and provide a place for constructive discourse across the political spectrum.

Many customers also have asked what they can do as individuals to move our country forward in this divisive and difficult time. Our view is that the greatest enemies of any democracy, including ours, are cynicism and complacency. Shortly, we’ll be announcing a series of programs that P&P will host to address particular issues raised in the presidential campaign, including race, voting rights, women’s rights, immigration, and climate change. Stay tuned for more on that.

In the meantime, our staff has been busily assembling a display table highlighting books that cover a range of emotions and concerns generated by the election of Donald Trump. The display is called “Don’t Give Up. Stand Up. Read Up.” It includes books that promote political engagement and activism along with quite a few titles that try to explain the populist anger that has fueled Trump’s rise to power and the nationalist movements his election mirrors around the world. Among the most popular with our customers in recent days are:

Hope in the Dark by Rebecca Solnit. Originally published in 2004, Solnit’s influential book has been reissued with a new foreword and afterword. Drawing on her decades of activism and a wide reading of environmental, cultural, and political history, Solnit argues that radicals have a long, history of transformative victories. She makes the case for hope through political engagement, even in the darkest times.

Hillbilly Elegy by J.D. Vance. If any book this year can help explain the alienation and rage felt by poor and working-class whites in the rust belt and Appalachia, it’s this one. This isn’t a political book but rather a memoir and cultural expose written by a young, white, straight, Protestant male who grew up in hillbilly country in Ohio. A graduate of Ohio State and Yale Law School, Vance yearns to understand his former and current worlds and the enormous cultural chasm that divides them.

Strangers in Their Own Land by Arlie Russell Hochschild. This is a vivid and illuminating report by a renowned sociologist who spent several years studying white conservative Tea Party supporters in the Louisiana bayou region. A keen and respectful listener, Hochschild lets the people she interviewed—local leaders, current and retired factory workers, veteran farmers, Pentecostals, and many more—have their say.

Populist Explosion by John B. Judis. One of America's most respected political analysts, Judis examines the rise of populism on both the right and the left, not only in the United States but also abroad.

What is Populism by Jan-Werner Muller. This book draws on examples from Latin America, Europe, and the United States to define the characteristics of populism and the deeper causes of its electoral successes in our time. It also proposes a number of concrete strategies for how liberal democrats should best deal with populists and, in particular, how to counter their claims to speak exclusively for “the silent majority” or “the real people.”

White Trash by Nancy Isenberg. A professor of American history at Louisiana State University, Isenberg looks at class in the United States, examining the white rural outcasts whom politicians from Andrew Jackson to Donald Trump have sought to rally, but who also over the years have tended to be vilified and shunned. Surveying political rhetoric and policy, popular literature and scientific theories over several hundred years, Isenberg challenges assumptions about America’s supposedly class-free society.

We Should All be Feminists by Chimamanda Ngozi Adichie. Drawing on her own experiences and her understanding of sexual politics, Adichie, the award-winning author of Americanah, explores what it means to be a woman now and offers a definition of feminism for the 21st century.

A is for Activist by Innosanto Nagara. This is a board book with lovely artwork and an inspiring message, especially for families who value progressive ideals. It introduces such terms as equality, democracy, justice, and freedom while teaching the alphabet. Although aimed at toddlers, the book can also prompt discussion with some older kids who might happen to be in the room.