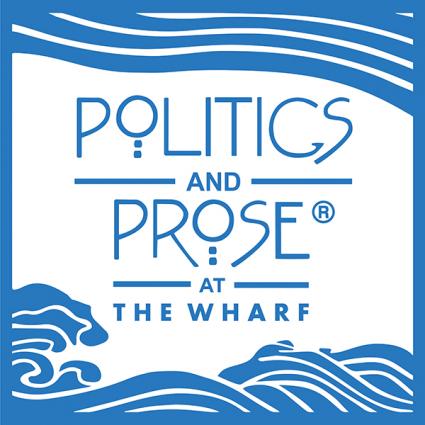 Politics and Prose is ready to open a new store at The Wharf on October 12, and our events team already has lined up some great events there this fall. We’ve highlighted them below, and you’ll see a wide range of authors and topics in the schedule. There truly will be something for everyone.

As at the main store, author talks at The Wharf will be free and open to the public. P&P’s monthly calendar will list them, and they’ll appear as well on a separate new website dedicated to activities and books at our Wharf store (www.politics-prose.com/wharf). Anyone interested also can follow along on our new Twitter and Instagram accounts @PandPWharf.

Hope to see you soon on the waterfront in Southwest DC. Come browse for books or join us for an engaging event at Politics and Prose at The Wharf.

October 16 at 7 p.m.: Solo by Kwame Alexander and Mary Rand Hess
A fast-paced story for teenagers about addiction, ethics, and personal identity. (The authors will be joined by Randy Preston on guitar.)

October 17 at 7 p.m.: Run for Something by Amanda Litman
Drawing on her own political campaign experience and on interviews with others who’ve run for office or worked on campaigns, Litman provides a primer on getting started in politics.

October 23 at 7 p.m.: The Taking of K-129 by Josh Dean and The Woman Who Smashed Codes by Jason Fagone
Journalists Dean and Fagone each recount instances of Cold War ingenuity—in one case, the recovery of a sunken Soviet submarine, in the other, the code-breaking achievements of pioneering cryptologist Elizebeth Smith Friedman.

October 25 at 7 p.m.: Senator Leahy: A Life in Scenes by Phillip Baruth
Baruth surveys the career of Democratic Senator Patrick Leahy of Vermont who, elected in 1975, is the longest currently serving senator in the U.S.

November 2 at 7 p.m.: Ice Capades by Sean Avery
Avery was hockey’s “bad boy” during the 12 years he played in the NHL, earning repeated fines and suspensions on and off the ice. He looks back at his hockey career and his post-retirement forays into fashion, activism, and advertising.

November 6 at 7 p.m.: Our Year of War by Chuck and Tom Hagel with Daniel P. Bolger
Former Defense Secretary Chuck Hagel and his younger brother Tom fought together in the same infantry squadron in Vietnam, yet the war affected each differently. They recount their wartime experiences in conversation with retired Lt. Gen. Bolger.

November 10 at 7 p.m.: Total Cat Mojo by Jackson Galaxy
Galaxy, a well-known cat behaviorist and host of Animal Planet’s My Cat from Hell, advises on how to properly care for felines of all ages and temperaments.

November 15 at 6 p.m.: The Vanity Fair Diaries by Tina Brown
Brown, the former editor-in-chief of Vanity Fair, recounts how she reinvented the publication and shares inside stories behind some of the magazine’s signature moments.

November 29 at 7 p.m.: Mother of All Pigs by Malu Halasa
Halasa, who has covered the Middle East for NPR, The Guardian, The Huffington Post, and other media, presents her debut novel set in a small Jordanian town buffeted by the Syrian conflict.

November 30 at 7 p.m.: Romance and the Resistance: A Romance Panel featuring Hate To Want You by Alisha Rai and An Extraordinary Union by Alyssa Cole
Acclaimed romance novelists Rai and Cole discuss their latest books with Sarah Wendall. Whether you’re a long-established fan or new to one of publishing’s most popular genres, this event offers a great opportunity for romance by the waterfront.