Undeterred: How One Determined Vietnamese Orphan Carved Out a Place for Himself in America (Paperback) 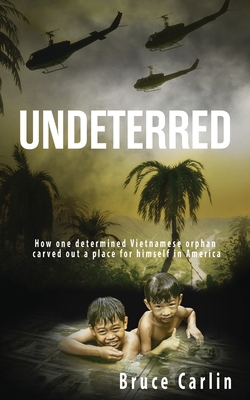 Undeterred: How One Determined Vietnamese Orphan Carved Out a Place for Himself in America (Paperback)


Not On Our Shelves—Ships in 1-5 Days
It's a twenty-foot drop off Flower Bridge...

With tanks approaching and bombs exploding mere yards away, five-year-old Long has only moments to decide whether to risk the jump to join his brother in the water below. The boys must leave everything they know in order to survive and unknowingly have embarked on an intense journey, one that will lead to a new life in America.

But even having come so far, the boys will face new perils in the United States and find that the only thing they can depend on is each other. Encountering the indifference and neglect inside a string of foster homes, Long determines that the only way to regain his independence is to earn his own money.

Undeterred is a moving ride through the life of one determined boy who, despite the bigotry and hate he faces, carves out a place for himself in America.

At the end of Undeterred, we share some of Long's powerful investment principles. These principles took many years to develop, and made him the financial success he is today.