Days of Fury: Ghost Troop and the Battle of 73 Easting (Hardcover) 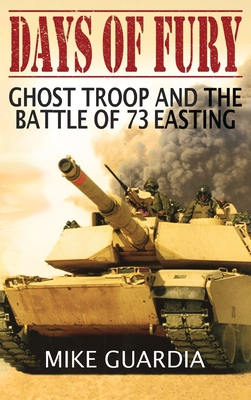 Days of Fury: Ghost Troop and the Battle of 73 Easting (Hardcover)

A riveting true story of tank warfare on the frontlines of Operation Desert Storm.

August 1990: Iraqi forces under the command of Saddam Hussein invaded the tiny emirate of Kuwait. Within hours, the Kuwaiti defenses collapsed under the onslaught of the Iraqi Army. In response, the US military led a coalition of thirty-four nations in what became Operation Desert Storm-a violent campaign to eject the Iraqis from Kuwait. At the tip of the spear were the men of Ghost Troop in the US Army's 2d Armored Cavalry Regiment.

Commanded by Captain Joseph Sartiano, Ghost Troop was among the lead elements of the US VII Corps' advance into Iraq. On February 26, 1991, Ghost Troop encountered a brigade-sized element of the Tawakalna Division- the elite frontline forces of Iraq's Republican Guard. Although significantly outnumbered and outgunned, Ghost Troop won a decisive victory with minimal losses to their own ranks. History would call it the Battle of 73 Easting.

Based on hours of interviews and archival research by author Mike Guardia, this minute-by-minute rendition of the battle reveals an intimate, no-holds-barred account of modern warfare...as told by the men who lived it.

Days of Fury is their story.