Raspberry Pi 4: The Complete User Guide for Beginners and Pro to Master the New Raspberry Pi 4 with Tips and Tricks for DIY Innovative (Paperback) 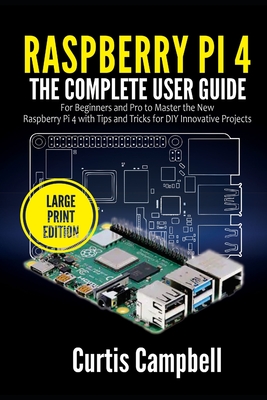 Raspberry Pi 4: The Complete User Guide for Beginners and Pro to Master the New Raspberry Pi 4 with Tips and Tricks for DIY Innovative (Paperback)


Not On Our Shelves—Ships in 1-5 Days
(This book cannot be returned.)
Are you in search of a cheap way to learn to program, develop robots, and build certain codes with a suitable PC? If that is the case, then keep on reading. The Raspberry Pi 4 is a credit-sized PC that has brought a whole new dimension to the use of computer systems. Since its release in 2013, Raspberry Pi has grown massively to offer amazing features and functions to Raspberry Pi users. In recent times, Raspberry Pi 4 users can learn tons of things including programming, building projects, setting up circuits and so much more without too much stress. Additionally, the Raspberry Pi 4 also permits users to install software, install Ubuntu, install Windows 10, and other installation procedures. This user guide will also take you by hand and make you a Raspberry Pi 4 pro in no time. By reading this guide, you will begin making Raspberry Pi projects, build robots, know coding, programming and so much more. Here is a snippet of what you will learn in this user guide: This is just a few of what is contained in this book and you can Download FREE with Kindle UnlimitedSo what are you waiting for? Scroll up and Click the Orange - BUY NOW WITH 1-CLICK BUTTON- on the top right corner and Download Now You won't regret you did See you inside