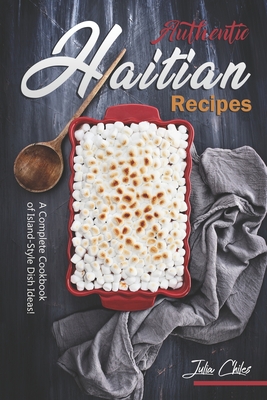 
Not On Our Shelves—Ships in 1-5 Days
(This book cannot be returned.)
What is it like to enjoy the native dishes of Haiti? What influenced Haitians to prepare their wonderful dishes? If you have never traveled to Haiti, you may not have a clear picture of their cuisine. You could have a sense, knowing that the country is in a tropical area, but many other countries have influenced their food. Haitian foods are Caribbean in taste, to a great degree, and their recipes utilize many of the ingredients indigenous to the area. It also is a Creole type of food, with a blend of many influences. They utilize mixed spices and roots, reflecting their African heritage as well as the complexity of the region. The cuisine of Haiti is sometimes lumped with that of other islands as being Caribbean in nature. But they have their own distinct flavors, too. They use peppers and herbs extensively. Typical dishes include rice with pinto beans, red snapper, marinade, onions and tomatoes. Traditional sauces in Haiti are thinner than that of Cuba and some other countries. They frequently eat chicken, beef and goat meat, as well as oxtail. Their meats are often cooked in marinades with many hot and spicy seasonings. From their meats and seafood to vegetables of all types, Haitian cuisine is delicious to eat and fun to prepare. Turn the page and let's cook like they do in Haiti...