Conquering the Pacific: An Unknown Mariner and the Final Great Voyage of the Age of Discovery (MP3 CD) 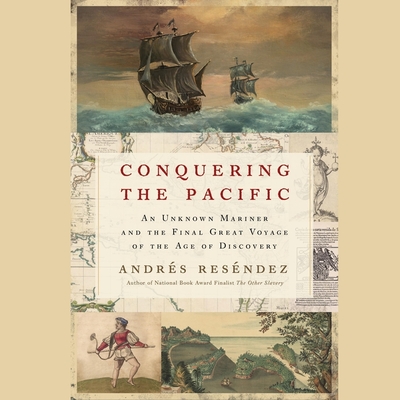 Conquering the Pacific: An Unknown Mariner and the Final Great Voyage of the Age of Discovery (MP3 CD)


Special Order—Subject to Availability
The story of an uncovered voyage as colorful and momentous as any on record for the Age of Discovery--and of the Black mariner whose stunning accomplishment has been until now lost to history It began with a secret mission, no expenses spared. Spain, plotting to break Portugal's monopoly trade with the fabled Orient, set sail from a hidden Mexican port to cross the Pacific--and then, critically, to attempt the never-before-accomplished return, the vuelta. Four ships set out from Navidad, each one carrying a dream team of navigators. The smallest ship, guided by seaman Lope Mart n, a mulatto who had risen through the ranks to become one of the most qualified pilots of the era, soon pulled far ahead and became mysteriously lost from the fleet. It was the beginning of a voyage of epic scope, featuring mutiny, murderous encounters with Pacific islanders, astonishing physical hardships--and at last a triumphant return to the New World. But the pilot of the fleet's flagship, the Augustine friar mariner Andr's de Urdaneta, later caught up with Mart n to achieve the vuelta as well. It was he who now basked in glory, while Lope Mart n was secretly sentenced to be hanged by the Spanish crown as repayment for his services. Acclaimed historian Andr's Res ndez, through brilliant scholarship and riveting storytelling--including an astonishing outcome for the resilient Lope Mart n--sets the record straight.