Alice Ate an Apple: The World of Letters (Hardcover) 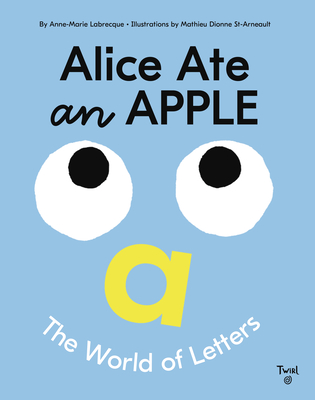 Alice Ate an Apple: The World of Letters (Hardcover)


On Our Shelves Now at:
The perfect next-step book for young children who have learned their ABCs.Alice Ate an Apple is a fun, colorful romp through the world of uppercase, lowercase, and even cursive letters—from apples to zebras! Each spread highlights a letter and has a sentence that includes the featured letter in its various forms. Readers can also play a game by counting how many times that letter appears in the sentence. Handy hints and an answer key in the back offer extra help.
• Encourages literary development, helping young children become independent readers and writers
• A built-in counting game that develops observation skills and boosts confidence
• A fun language-learning adventure!

Alice Ate an Apple helps young children build on their mastery of the alphabet and encourages them to expand their language skills.
• Great family and classroom read-aloud
• Books for children aged 3 to 5
• Books for preschool and kindergarten children
Anne-Marie Labreque is an elementary school teacher who earned a doctorate in education, specializing in written language learning. She lives in Quebec, Canada.

Mathieu Dionne St-Arneault studied graphic design at the UQAM School of Design in Montreal, Canada, where he lives. The founder of a graphic design studio, he works as an illustrator and graphic designer on projects in the business, music, and art fields.