Eve and the Lost Ghost Family: A Graphic Novel (Hardcover) 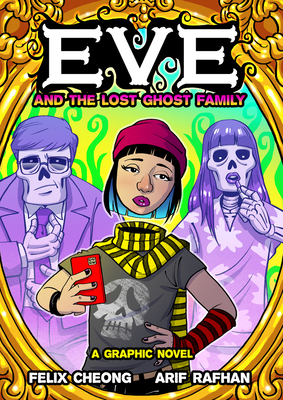 Eve and the Lost Ghost Family: A Graphic Novel (Hardcover)


Coming Soon—Pre-Order Now
Eve and the Lost Ghost Family is a deadpan-funny YA graphic novel about Eve, a 14-year-old on the verge of becoming her own person, and her quarrelsome parents.

Killed in a car accident one night, they begin their wandering in the afterlife – only to discover they’re simply reliving their life in an eternal cycle.

Meanwhile, Eve becomes drawn to a girl whose house she’s haunting and finds they actually share the same taste in music and poetry. Now, how do you scare the living daylights out of your soulmate?

And there’s the small matter of looking for her equally-dead boyfriend who’s somewhere out there – wherever “out there” is in the Great Beyond.

Eve and the Lost Ghost Family will captivate you with its quirky characters, its innovative blend of poetry and comic book art and its unique spin on growing-up pains – first love, dealing with meddlesome parents, doubts about self-identity and, of course, the answer the ultimate question: What happens after death?
Felix Cheong is the author of 20 books. His works have been widely anthologized and nominated for the prestigious Frank O’Connor Award and the Singapore Literature Prize. Conferred the Young Artist Award in 2000 by the National Arts Council, he holds a master’s in creative writing and is currently an adjunct lecturer with the National University of Singapore, Murdoch University, University of Newcastle and Curtin University.

Arif Rafhan is a Malaysian illustrator, comic artist and runs his neighborhood doodle class at home. He also provides doodle therapy service for corporate clients and government bodies. His online comics, #seketulsina is about his children being themselves.