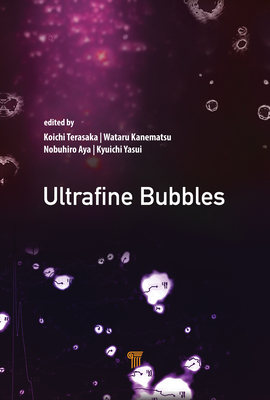 Ultrafine bubbles (UFBs) are gas-filled bubbles with a diameter smaller than 1 μm. They are sometimes called bulk nanobubbles because these are not on a solid surface but inside a bulk liquid (water). They are already being used in commercial processes such as cleaning and plant cultivation. However, many mysteries still exist with respect to UFBs, such as mechanisms of stability, OH radical formation, and biological and medical effects. This is the first book on UFBs that reviews research done on them. It is helpful for those interested in the fundamentals of this emerging field and its applications, including cleaning, biological, medical, and dental students and researchers.

Koichi Terasaka is a professor at the Department of Applied Chemistry, Keio University, Japan. He is also chair of the Union of Fine Bubble Scientists and Engineers, director of the Fine Bubble Industries Association, and expert of the ISO/TC 281 (fine bubble technology) committee. He is a chemical engineer who has been involved with bubble engineering since the 1980s and has recently been working on industrial application of UFBs.Kyuichi Yasui is a senior research scientist at the National Institute of Advanced Industrial Science and Technology (AIST), Japan. He received his PhD from the Department of Physics, Waseda University, Japan, in 1996. His current research focuses on numerical simulations on UFBs and other topics in sonochemistry, sonoluminescence, acoustic cavitation, and nanocrystalsWataru Kanematsu is a former principal research manager at AIST. He is involved in research on characterization of UFBs and UFB-containing liquid. Industrial standardization of characterization technology is another technical interest for him.Nobuhiro Aya is a supervisory innovation coordinator at AIST. His scientific interests are focused mainly on fine bubbles and fine particles and also on methodological issues on combination and integration of various technologies and improvement of industrial/social usage of technologies. He is also the committee manager of the ISO/TC 281 (fine bubble technology) since its establishment in 2013.