How Britain Underdeveloped the Caribbean: A Reparation Response to Europe's Legacy of Plunder and Poverty (Paperback) 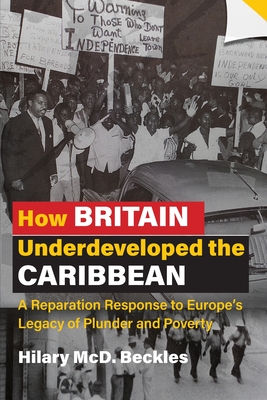 How Britain Underdeveloped the Caribbean: A Reparation Response to Europe's Legacy of Plunder and Poverty (Paperback)


Not On Our Shelves—Ships in 1-5 Days
"The modern Caribbean
economy was invented, structured and managed by European states for one
purpose: to achieve maximum wealth extraction to fuel and sustain their
national financial, commercial and industrial transformation." So begins How Britain Underdeveloped the Caribbean: A
Reparation Response to Europe's Legacy of Plunder and Poverty as Hilary
McD. Beckles continues the groundbreaking work he began in Britain's Black Debt: Reparations for Caribbean Slavery and Native
Genocide. We are now in
a time of global reckoning for centuries of crimes against humanity perpetrated
by European colonial powers as they built their empires with the wealth
extracted from the territories they occupied and exploited with enslaved and,
later, indentured labour. The systematic brutality of the transatlantic trade
in enslaved Africans and the plantation economies did not disappear with the
abolition of slavery. Rather, the means of exploitation were reconfigured to
ensure that wealth continued to flow to European states. Independence
from colonial powers in the twentieth century did not mean real freedom for the
Caribbean nations, left as they were without the resources for meaningful
development and in a state of persistent poverty. Beckles focuses his attention
on the British Empire and shows how successive governments have systematically
suppressed economic development in their former colonies and have refused to accept
responsibility for the debt and development support they owe the Caribbean.