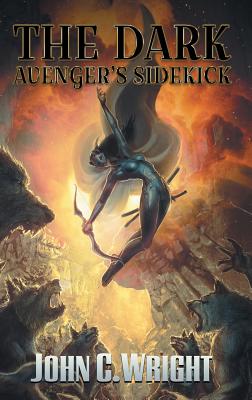 This is book number 2 in the Moth & Cobweb series.

The nameless girl does not know who or what she is. She does not even know her name. But she quickly learns that she has enemies who are trying to kill her, as well as lethal skills that no girl her age should know. And, she inadvertently discovers, she can also fly.

Her only clue to her identity is the mysterious, shape-changing ring on her finger that appears to be alive. And the one thing she knows for a certainty is that she must find out who she is before the monsters chasing her are able to hunt her down. THE DARK AVENGER'S SIDEKICK is a trilogy that contains DAUGHTER OF DANGER, CITY OF CORPSES, and TITHE TO TARTARUS, It is the second trilogy in the MOTH & COBWEB series, an astonishing dodecaology about magical worlds of Day, Night, and Twilight by John C. Wright.

John C. Wright is one of the living grandmasters of science fiction and the author of THE GOLDEN AGE, AWAKE IN THE NIGHT LAND, and IRON CHAMBER OF MEMORY, to name just three of his exceptional books. He has been nominated for both the Nebula and Hugo Awards, and his novel SOMEWHITHER won the 2016 Dragon Award for Best Science Fiction Novel at Dragoncon.