The Linear Algebra a Beginning Graduate Student Ought to Know (Paperback) 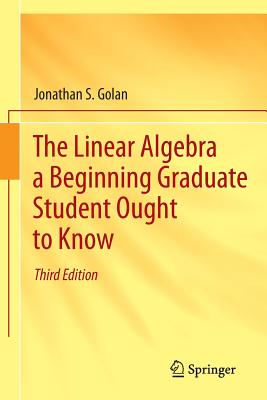 The Linear Algebra a Beginning Graduate Student Ought to Know (Paperback)


Not On Our Shelves—Ships in 1-5 Days
Linear algebra is a living, active branch of mathematics which is central to almost all other areas of mathematics, both pure and applied, as well as to computer science, to the physical, biological, and social sciences, and to engineering. It encompasses an extensive corpus of theoretical results as well as a large and rapidly-growing body of computational techniques. Unfortunately, in the past decade, the content of linear algebra courses required to complete an undergraduate degree in mathematics has been depleted to the extent that they fail to provide a sufficient theoretical or computational background. Students are not only less able to formulate or even follow mathematical proofs, they are also less able to understand the mathematics of the numerical algorithms they need for applications. Certainly, the material presented in the average undergraduate course is insufficient for graduate study. This book is intended to fill the gap which has developed by providing enough theoretical and computational material to allow the advanced undergraduate or beginning graduate student to overcome this deficiency and be able to work independently or in advanced courses. The book is intended to be used either as a self-study guide, a textbook for a course in advanced linear algebra, or as a reference book. It is also designed to prepare a student for the linear algebra portion of prelim exams or PhD qualifying exams. The volume is self-contained to the extent that it does not assume any previous formal knowledge of linear algebra, though the reader is assumed to have been exposed, at least informally, to some of the basic ideas and techniques, such as manipulation of small matrices and the solution of small systems of linear equations over the real numbers. More importantly, it assumes a seriousness of purpose, considerable motivation, and a modicum of mathematical sophistication on the part of the reader. In the latest edition, new major theorems have been added, as well as many new examples. There are over 130 additional exercises and many of the previous exercises have been revised or rewritten. In addition, a large number of additional biographical notes and thumbnail portraits of mathematicians have been included.