Faiz: From Passionate Love to a Cosmic Vision (Hardcover) 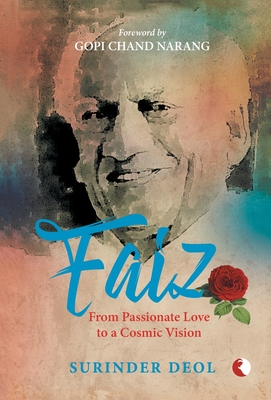 Faiz: From Passionate Love to a Cosmic Vision (Hardcover)

Mujhse pehli si mohabbat meri mahbuub n maang ('My dearest, don't ask for the love we once had)

This line from Faiz's first poetry collection deeply touched the public consciousness, and it signalled the arrival of a new kind of poet who not only wrote about agonies of love but at the same time confronted the issues of daily struggles, including poverty, hunger, injustice and the oppressive colonial regime. He fused his lyrical compositions with the grammar of revolution and resistance that was needed while not giving up on alluring descriptions of the beloved's tresses and ruby lips. There was the beloved, he said, but there was also the struggle of attaining freedom, and these two things were not separate. He brought these two themes together, and they became one.

As a secular humanist, Faiz was not willing to accept the idea that people should be separated based on their religious identities. All human beings yearn, he emphasized, for peace and harmony. National boundaries can separate people, but they cannot divide the emotional affinity they have for one another. To understand the importance of this cosmic vision, one had to look at the earth from the sky and see the planet as the home for all its inhabitants.

This book traces the evolution of the poet's work from its early days to the time of its full fruition. A poet's life is not different from the words that he writes and that is why in this book, poetry and biography are meshed in presenting a rich portrait of an exceptional poet.