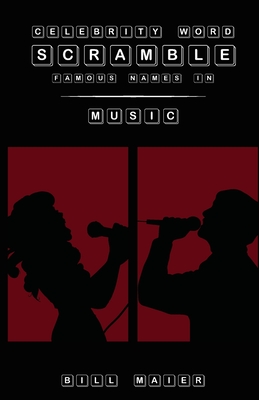 The Celebrity Word Scramble Music Edition is a word puzzle game based on the concept of an anagram, where you need to re-organize the letters to recreate a word. The Celebrity Word Scramble Music series utilizes names of different performers, ranging from pop music icons, for example, Michael Jackson and Elvis Presley to current artists like Taylor Swift. Each puzzle page has several five or six letter words, circled letters in each word helps you in forming the celebrity's name. Apart from the selected letters, the puzzle also provides details regarding the celebrity's biography and a few examples of their most popular songs. Celebrity Word Scramble is intended to interest a wide scope of puzzle lovers with puzzle books on sports, entertainment, history, and literature.

Bill Maier graduated from the University of Maryland with a degree in Journalism before settling into a 28-year career in consumer product sales. He grew up in a household constantly infused with the activity of crossword puzzles. Having inherited the puzzle bug from his dad, he has been doing word search and word jumbles all his life.

- 100+ puzzles to solve on the most iconic musicians

- All solutions for the puzzle, provided at the end of the book